Always Faithful: Join Jerry McNeal And His Ghostly K-9 Partner As They Put Their Gifts To Good Use. (Paperback) 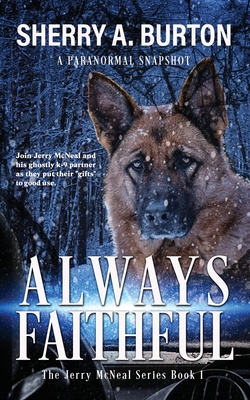 Call it a premonition. Call it intuition. Call it anything you like, but Pennsylvania State Trooper Jerry McNeal simply thinks of it as "that feeling."

That feeling may come on without warning, so intense he can't breathe.

Or, it may be a gentle nag that pulls at him until he decides to do something about it. He never quite knows what "it" is until he gets there, but when he arrives, he always knows he's found what he is looking for.

During one of the biggest snowstorms of the year, Trooper McNeal feels that familiar stir. An unease that grows with each flake that falls. Its intensity pulls at him until Jerry has no choice but to venture out onto the treacherous roads, following an invisible pull that grips at his very soul.

Tonight, that feeling is going to take Trooper McNeal into a blizzard when the streets are supposed to be empty to save a life that would have otherwise been lost.

Only tonight, Trooper McNeal is not going alone...

This months Riverstone Book Club selection The House Across the Lake: A Novel (Hardcover). END_OF_DOCUMENT_TOKEN_TO_BE_REPLACED