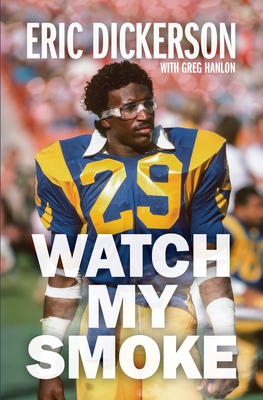 Eric Dickerson is the greatest player in Los Angeles Rams history and the NFL's single season record holder for most rushing yards. In 2019, Dickerson was named to the National Football League's 100th Anniversary All-Time Team. With an elegant upright running style that produced some of football's most-watched highlights, it was said he was so smooth you couldn't hear his pads clack as he glided past you. But during his Hall of Fame career, his greatness was often overshadowed by his contentious disputes with Rams management about his contract. In the pre-free agency era, tensions over his exploitative contract often overshadowed his accomplishments. What's his problem? went the familiar refrain from the media. Can't he just shut up and run? It's time to reexamine how Eric Dickerson was portrayed. For the first time, he's telling his story. And he's not holding anything back.

Eric Dickerson is a Hall of Fame NFL running back and the greatest player in Los Angeles Rams history. He owns the single season rushing yards record, football's most hallowed mark, with 2,105 in 1984, and he accumulated 10,000 career rushing yards faster than any runner in league history. Born and raised in Sealy, Texas, Eric became the country's top recruit as a high school senior and committed to Southern Methodist University, where he anchored the famous "Pony Express" backfield. He is currently an analyst for FS1 and joined the Rams front office as Vice President of Business Development. He lives in Los Angeles. Greg Hanlon is an editor at People magazine who has written for Sports Illustrated, The New York Times, The New York Times Magazine and Slate. His writing has been anthologized in The Best American Sports Writing. He was a 2015 finalist in national reporting for The Livingston Awards for Young Journalists. He lives in New Jersey.

This months Riverstone Book Club selection The House Across the Lake: A Novel (Hardcover). END_OF_DOCUMENT_TOKEN_TO_BE_REPLACED