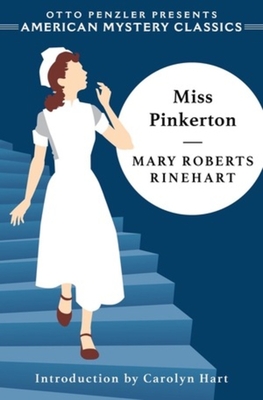 After a suspicious death at a country mansion, a brave nurse joins the household to see behind closed doors

Miss Adams is a nurse, not a detective—at least, not technically speaking. But while working as a nurse, one does have the opportunity to see things police can’t see and an observant set of eyes can be quite an asset when crimes happen behind closed doors. Sometimes Detective Inspector Patton rings Miss Adams when he needs an agent on the inside. And when he does, he calls her “Miss Pinkerton” after the famous detective agency.

Everyone involved seems to agree that mild-mannered Herbert Wynne wasn’t the type to commit suicide but, after he is found shot dead, with the only other possible killer being his ailing, bedridden aunt, no other explanation makes sense. Now the elderly woman is left without a caretaker and Patton sees the perfect opportunity to employ Miss Pinkerton’s abilities. But when she arrives at the isolated country mansion to ply her trade, she soon finds more intrigue than anyone outside could have imagined and—when she realizes a killer is on the loose—more terror as well.

Reprinted for the first time in twenty years, Miss Pinkerton is a suspenseful tale of madness and murder. The book served as the basis for a 1932 film with the same title, and its titular character appeared in several others of Rinehart’s most popular novels.

Mary Roberts Rinehart (1876-1958) was the most beloved and best-selling mystery writer in America in the first half of the twentieth century. Born in Pittsburgh to the owner of a sewing machine factory, she wrote fiction in her spare time until a stock market crash sent her and her husband into debt, forcing her to lean on her writing to pay the bills. Her first two novels, The Circular Staircase (1908) and The Man in Lower Ten (1909), established her as a bright young talent, and it wasn’t long before she was a regular on bestseller lists.Among her dozens of novels were The Amazing Adventures of Letitia Carberry (1911) and The Bat (1932), which was among the inspirations for Bob Kane’s Batman. Today, Rinehart is often called an American Agatha Christie, even though she was much more popular than Christie during her heyday.

Carolyn Hart is a Mystery Writers of America Grand Master and the author of sixty novels, including twenty-seven titles in the Death on Demand series, which follows a bookseller-turned-sleuth in a South Carolina mystery bookstore. Her work has received numerous accolades, including Agatha, Anthony, and McCavity Awards.

Fans of Agatha Christie will be pleased with this welcome reissue.
— Booklist

[Rinehart’s] literary distinction lies in the combination of love, humor and murder that she wove into her tales. . . . She helped the mystery story grow up.
— The New York Times