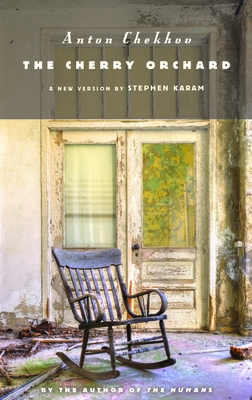 "Mr. Karam's plays aren't tearful, but they are often about loss--of love, of health, of innocence--and the messy, haphazard, necessary ways we get on with our lives afterward... He specializes in painful comedies that really shouldn't be as funny as they are. Karam is a mature writer, very much in command of his gifts." --New York Times

"Stephen Karam is among the very best of his generation of playwrights." --New York Magazine

Stephen Karam is known for his dedication to exploring the idiosyncrasies of human speech and behavior--the subtleties, the depth, and the won­derfully awkward minutiae. With this new adaptation of The Cherry Orchard, Chekhov's canonical masterpiece about a family on the brink of bankruptcy, Karam's fluid style pairs harmoniously with the work of the master playwright.

Stephen Karam is the author of two plays that were named finalists for the Pulitzer Prize for Drama: The Humans in 2016 and Sons of the Prophet in 2012. The Humans won the 2016 Tony Award for Best Play. His other work includes the play Speech & Debate and a film adaptation of Chekhov's The Seagull for Sony Pictures Classics.

Stephen Karam's play The Humans won the 2016 Tony Award for Best Play and was a finalist for the 2016 Pulitzer Prize. Other plays include Sons of the Prophet, a finalist for the 2012 Pulitzer Prize and the winner of the 2012 Drama Critics Circle, Outer Critics Circle, Lucille Lortel and Hull-Warriner awards for Best Play. Born and raised in Scranton, PA, he lives in New York City.

This months Riverstone Book Club selection The House Across the Lake: A Novel (Hardcover). END_OF_DOCUMENT_TOKEN_TO_BE_REPLACED