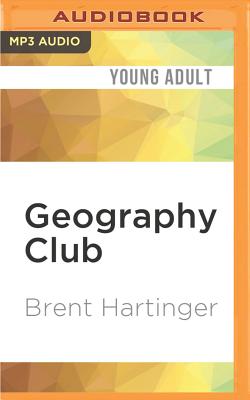 By Brent Hartinger, Josh Hurley (Read by)
$9.99
Email or call for price.

This is book number 1 in the Russell Middlebrook series.

Russel Middlebrook is convinced he's the only gay kid at Goodkind High School. Then his online gay chat buddy turns out to be none other than Kevin, the popular but closeted star of the school's baseball team. Soon Russel meets other gay students, too. There's his best friend Min, who reveals that she is bisexual, and her soccer-playing girlfriend Terese. Then there's Terese's politically active friend, Ike. But how can kids this diverse get together without drawing attention to themselves?

"We just choose a club that's so boring, that nobody in their right mind would ever in a million years join it. We could call it Geography Club "

Brent Hartinger's debut novel, what became first of a series about Russel Middlebrook, is a fast-paced, funny, and trenchant portrait of contemporary teenagers who may not learn any actual geography in their latest club, but who learn plenty about the treacherous social terrain of high school and the even more dangerous landscape of the human heart. This is Book 1 in the Russel Middlebrook Series.