Barefoot in the City of Broken Dreams (Russel Middlebrook: The Futon Years #2) (Paperback) 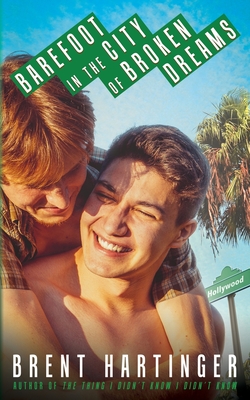 "There was no way moving to Los Angeles was going to make me give up my soul. After all, I'd already seen all the movies about Hollywood. I knew how things worked."

Twenty-four year-old Russel Middebrook and his boyfriend have moved to Los Angeles so Russel can try to make it as a screenwriter.

Almost right away, in a forgotten old house off of Sunset Boulevard, Russel meets Isaac Brander, a once-famous film producer who is convinced he can turn Russel's screenplay into a movie.

Russel knows that success can't possibly come this easy. After all, most of Russel's Los Angeles friends are so desperate to make it that it's downright scary. His ex-boyfriend, Otto, is trying everything to become an actor, and Daniel, the sexy neighbor, doesn't even need a casting couch to get naked.

So what's the catch with Mr. Brander? Could it be that movies about Hollywood don't tell the whole truth? But what does that mean for Russel's soul?

Barefoot in the City of Broken Dreams, a companion book to Brent Hartinger's The Thing I Didn't Know I Didn't Know, is a fast-paced, funny story about the price of fame in Hollywood: the hilarious lengths people will go to achieve it, and the touching secret to survival when things don't work out exactly as planned.

Advance Praise for Barefoot in the City of Broken Dreams

"A sharp, canny, highly engaging tour through a Hollywood of cunning characters and colorful intrigues, guided by the clever voice of Russel Middlebrook as an eager young screenwriter trying to bust in. I was charmed by every sly, sexy page." - Barry Sandler, screenwriter of Making Love and Crimes of Passion

"With his trademark wit, warmth, and economy, Brent Hartinger brilliantly captures what it's like to move to L.A. and try and make it in Hollywood: the highs and the lows, the friends and the phonies, the fun and the frustration. And by the way, is it too late for me to be Russel Middlebrook when I grow up?" - Dennis Hensley, co-screenwriter of Testosterone, author of Misadventures in the (213)

BRENT HARTINGER is an author, teacher, playwright, and screenwriter. Geography Club, the book in which Russel Middlebrook first appears (as a teenager), is also a successful stage play and a feature film co-starring Scott Bakula.

In 1990, Brent helped found one of the world's first gay teen support groups, in his hometown of Tacoma, Washington. In 2005, he co-founded the entertainment website AfterElton.com, which was sold to MTV/Viacom in 2006. He now lives in Seattle with his husband, Michael Jensen.

This months Riverstone Book Club selection The House Across the Lake: A Novel (Hardcover). END_OF_DOCUMENT_TOKEN_TO_BE_REPLACED