Smoketown: The Untold Story of the Other Great Black Renaissance (Paperback) 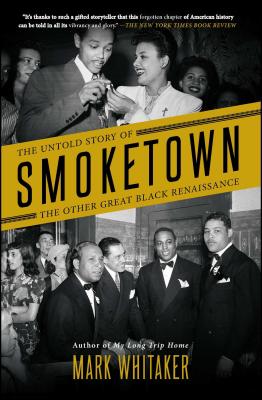 A brilliant, lively account of the Black Renaissance that burst forth in Pittsburgh from the 1920s through the 1950s—“Smoketown will appeal to anybody interested in black history and anybody who loves a good story…terrific, eminently readable…fascinating” (The Washington Post).

Today black Pittsburgh is known as the setting for August Wilson’s famed plays about noble, but doomed, working-class citizens. But this community once had an impact on American history that rivaled the far larger black worlds of Harlem and Chicago. It published the most widely read black newspaper in the country, urging black voters to switch from the Republican to the Democratic Party, and then rallying black support for World War II. It fielded two of the greatest baseball teams of the Negro Leagues and introduced Jackie Robinson to the Brooklyn Dodgers. Pittsburgh was the childhood home of jazz pioneers Billy Strayhorn, Billy Eckstine, Earl Hines, Mary Lou Williams, and Erroll Garner; Hall of Fame slugger Josh Gibson—and August Wilson himself. Some of the most glittering figures of the era were changed forever by the time they spent in the city, from Joe Louis and Satchel Paige to Duke Ellington and Lena Horne.

Mark Whitaker’s Smoketown is a “rewarding trip to a forgotten special place and time” (Pittsburgh Post-Gazette). It depicts how ambitious Southern migrants were drawn to a steel-making city on a strategic river junction; how they were shaped by its schools and a spirit of commerce with roots in the Gilded Age; and how their world was eventually destroyed by industrial decline and urban renewal. “Smoketown brilliantly offers us a chance to see this other Black Renaissance and spend time with the many luminaries who sparked it…It’s thanks to such a gifted storyteller as Whitaker that this forgotten chapter of American history can finally be told in all its vibrancy and glory” (The New York Times Book Review).

Mark Whitaker is the author of the critically acclaimed memoir, My Long Trip Home, and Smoketown: The Untold Story of the Other Great Black Renaissance. The former managing editor of CNN Worldwide, he was previously the Washington bureau chief for NBC News and a reporter and editor at Newsweek, where he rose to become the first African-American leader of a national newsweekly.

This months Riverstone Book Club selection The House Across the Lake: A Novel (Hardcover). END_OF_DOCUMENT_TOKEN_TO_BE_REPLACED