Flight 93: The Story, the Aftermath, and the Legacy of American Courage on 9/11 (Paperback) 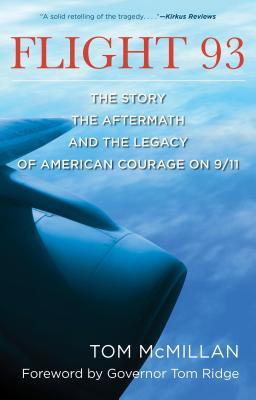 The passengers of United Airlines Flight 93 on September 11, 2001 have earned their rightful place among the pantheon of American heroes. Flight 93 provides a riveting narrative based on interviews, oral histories, transcripts, recordings, personal tours of the crash site, and voluminous trial evidence made public only in recent years. There also is plenty of chilling new detail for readers who think they know the story of the flight. Utilizing research tools that were not available in the years immediately after the crash, the book offers the most complete account of what actually took place aboard United 93 - from its delayed takeoff at Newark International Airport to the moment it plunged upside-down at 563 miles per hour into an open field in rural Somerset County, Pennsylvania.

Tom McMillan has spent a lifetime in media and communications: as a newspaper sports writer, radio talk-show host, and for the past 17 years as Vice President of Communications for the Pittsburgh Penguins of the National Hockey League. He's written on deadline, interviewed superstars, traveled the world, grilled guests on radio shows, issued official statements, developed social media strategy, counseled millionaire owners and faced withering questions from TV reporters about his organization's controversial bankruptcy case. For three years he served as the Penguins' VP of Marketing in addition to VP of Communications. Through it all, McMillan has developed a vast network of media contacts - locally, regionally, and at national outlets such as NBC, USA Today and the New York Times. In his spare time he also serves on the board of directors of Pittsburgh's Heinz History Center, on the marketing committee of the Gettysburg Foundation, as a tour guide for the Civil War Room at Carnegie Library, as an adjunct professor of media and marketing at Point Park University and a volunteer at the Flight 93 National Memorial, where he helps to orient visitors to the crash site. His 15-year career with the Pittsburgh Post-Gazette, Pittsburgh Press and San Diego Union spanned events from the Olympics to the World Series, the NBA Finals, the Final Four, the Indy 500, and Triple Crown horse races. Since that time, he has spent almost two decades in the business office of a professional team, broadening his strategic thinking. He is wired into the Pittsburgh and regional media surrounding the Flight 93 National Memorial and has contacts nationally. He lives in Wexford, Pennsylvania.