What Happened to the Bennetts (Large Print / Library Binding) 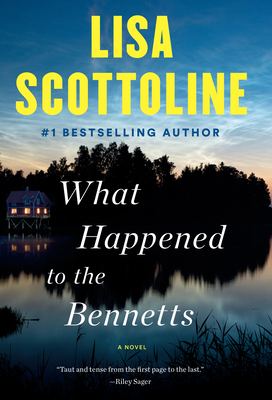 How far would you go to save your family? In this heart-stopping novel by #1 bestselling author Lisa Scottoline, a suburban father must answer that question when a botched carjacking places his family in the crosshairs of ruthless criminals. Jason Bennett is a family man and an elite court reporter--so good at his work that he was once selected to cover legal proceedings at Guantanamo Bay. One of his skills is the ability to read lips, which his fourteen-year-old son calls his "superpower." But his life takes a horrific turn when he is driving his family home from his teenaged daughter's lacrosse game, and he notices a pickup truck tailgating and cutting off their new Mercedes. Two men jump from the pickup, brandishing weapons, and demand that Jason turn over the Mercedes. He complies, getting his family and their dog out of the car. But when the dog leaps at the carjackers, one of their guns goes off. Jason hears a scream behind him, and his daughter falls to the street. Then there's another gunshot, as one carjacker shoots the other point-blank, killing him. The killer runs back to the pickup truck and drives away, leaving Jason to watch his daughter die. In his blinding grief, Jason receives a visit from the FBI. The agents inform him that the two carjackers work for a dangerous criminal organization distributing opiates in southeastern Pennsylvania and northern Delaware. The family must enter the witness protection program, or WITSEC. Hiding away, the family crumbles--and Jason begins to lose faith that the government is taking care of them at all. Jason sneaks out one night and discovers a startling fact that throws into doubt everything the government has been telling him. He takes matters into his own hands to save his family and bring his daughter's killer to justice, risking his life in the process. By the shocking end of the novel, Jason discovers a new definition of himself, shedding not only the identity the government has given him, but the one he was born with.

Lisa Scottoline is the New York Times-bestselling author of thirty-two novels. She has 30 million copies of her books in print in the United States and has been published in thirty-five countries. Scottoline also writes a weekly column with her daughter for The Philadelphia Inquirer. Lisa has served as President of Mystery Writers of America and has taught a course she developed, Justice in Fiction at the University of Pennsylvania Law School, her alma mater. She lives in the Philadelphia area.

This months Riverstone Book Club selection The House Across the Lake: A Novel (Hardcover). END_OF_DOCUMENT_TOKEN_TO_BE_REPLACED