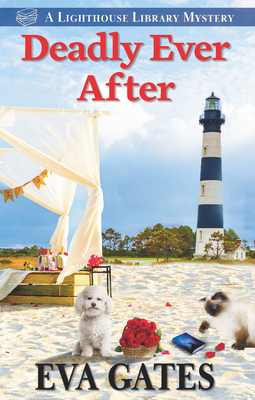 This is book number 8 in the Lighthouse Library Mystery series.

Librarian Lucy's wedding is at stake when a murder interrupts her engagement celebrations. To make it down the aisle, she'll have to find the killer to save the date in the 8th book in the Lighthouse Library mysteries. They're getting married Lucy Richardson and Connor McNeil have announced their engagement. Their friends throw a party for the couple at Coquina Beach, close to Lucy's beloved Bodie Island Lighthouse Library. As they're packing up the presents and the (few) leftovers from Josie's Cozy Bakery, who should arrive, but Richard Eric Lewiston III, Lucy's former almost-fianc and his overbearing mother Evangeline. Push comes to love when Evangeline makes no secret of why she's here: to get Lucy and Ricky back together. Lucy isn't temped in the least, and Ricky is nothing but embarrassed at his mother's desperate ploy. Before returning to Boston Evangeline throws a dinner party at Jake's Seafood Bar for a reluctant Lucy and her family. Lucy hopes to get the dinner over with and see Evangeline and Ricky returning to Boson. But when a body is found at the restaurant's kitchen door, Lucy is again forced to unwillingly put on her detective's hat and do what she can to save her family and her engagement. Meanwhile, the classic novel reading club is reading The Hound of the Baskervilles, and open war breaks out in the Lighthouse Library when Lucy agrees to temporarily take care of a dog named Fluffy, but Charles the library cat has other ideas.

Eva Gates is a national bestselling author who began her writing career as a Sunday writer: a single mother of three high-spirited daughters, with a full-time job as a computer programmer. Now she has more than twenty novels under her belt in the mystery genre, published under the name Vicki Delany. She lives in Ontario. This is her eighth Lighthouse Library mystery.

This months Riverstone Book Club selection The House Across the Lake: A Novel (Hardcover). END_OF_DOCUMENT_TOKEN_TO_BE_REPLACED