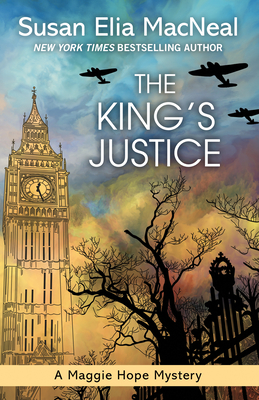 Can a stolen violin lead secret agent and spy Maggie Hope to a new serial killer terrorizing London? Find out as the acclaimed World War II mystery series from New York Times bestselling author Susan Elia MacNeal continues. Maggie Hope started out as Winston Churchill's secretary, but now she's a secret agent--and the only one who can figure out how the missing instrument ties into the murders. London, December 1942. As the Russian army repels German forces from Stalingrad, Maggie Hope takes a much-needed break from spying to defuse bombs in London. But Maggie herself is an explosion waiting to happen. Traumatized by her past, she finds herself living dangerously--taking huge risks, smoking, drinking, and speeding through the city streets on a motorbike. The last thing she wants is to get entangled in another crime. But when she's called upon to look into the theft of a Stradivarius, one of the finest violins ever made, Maggie can't resist. Meanwhile, there's a serial killer on the loose in London, targeting conscientious objectors. Little does she know that investigating this dangerous predator will pit her against a new evil--and old enemies. Only Maggie can uncover the connection between the robbery, the murders, and a link to her past.

Susan Elia MacNeal is the New York Times, Washington Post, and USA Today bestselling author of the Maggie Hope mystery series. She won the Barry Award and has been nominated for the Edgar, Macavity, Agatha, Left Coast Crime, Dilys, and ITW Thriller awards. She lives in Brooklyn, New York, with her husband and son.

This months Riverstone Book Club selection The House Across the Lake: A Novel (Hardcover). END_OF_DOCUMENT_TOKEN_TO_BE_REPLACED