Beyond a Reasonable Stout: A Sloan Krause Mystery (Mass Market) 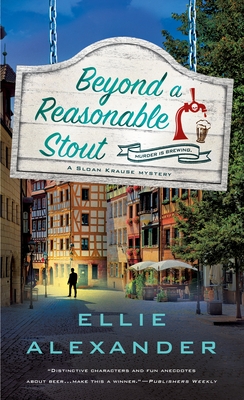 This is book number 3 in the A Sloan Krause Mystery series.

Oktoberfest is over and now it’s the dead season for beer maven and barstool sleuth Sloan Krause—literally.

In the Bavarian village of Leavenworth, Washington, the tourists are gone and the local villagers prepare for the upcoming winter light festival. Soon the German-inspired shops and restaurants will be aglow and visitors will return to the northern Cascades to drink warm mulled cider and peruse the holiday markets. Until then, Sloan Krause and her partner in crime Garrett Strong are experimenting with a new line of “hoppy holiday” craft beers at their brewery.

But the low-key vibes at Nitro are suddenly disrupted by a local political scandal: City Councilmember Kristopher Cooper is running for re-election on a platform of making Leavenworth dry—until, just before election night, Kristopher turns up dead. Now, with every beer-related businessperson in Leavenworth coming under suspicion, it’s up to Sloan to find out who the guilty party really is…before someone else gets tapped for murder.

ELLIE ALEXANDER is a Pacific Northwest native who spends ample time testing pastry recipes in her home kitchen or at one of the many famed coffeehouses nearby. When she's not coated in flour, you'll find her outside exploring hiking trails and trying to burn off calories consumed in the name of research. She is the author of the Bakeshop Mysteries, including Meet Your Baker and A Batter of Life and Death, as well as the Sloan Krause mysteries.

"Distinctive characters and fun anecdotes about beer and brewing help make this a winner. Readers will want to keep coming back for more." - Publishers Weekly

"Family is an essential element of this character-driven cozy series. While the primary mystery is solved in each book, the ongoing story line of Sloan's search for her own family story draws readers back." - Library Journal

This months Riverstone Book Club selection The House Across the Lake: A Novel (Hardcover). END_OF_DOCUMENT_TOKEN_TO_BE_REPLACED