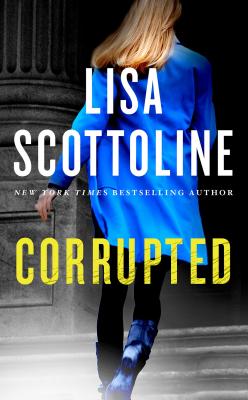 By Lisa Scottoline
$8.99
Email or call for price.

This is book number 3 in the A Rosato & DiNunzio Novel series.

“At 12, Jason is chubby, buck-toothed, and bullied every day by Ritchie. Philadelphia trial attorney Bennie Rosato tries to help Jason when he gets in trouble for fighting back. Thirteen years later, that same bully is dead, Jason appears to be the killer, and once again Bennie is called to help. As always, Scottoline's dialogue is excellent, legal terms are made easy to understand, characters are richly drawn, trial scenes are vivid, and there are huge, well-hidden surprises. I enjoyed it immensely!”
— Susan Wasson (M), Bookworks, Albuquerque, NM

Blockbuster bestselling author Lisa Scottoline is back with Corrupted, a novel of breathtaking legal suspense about one woman’s fight for justice—at all costs.

As the founder of the all-female Rosato & DiNunzio law firm, Bennie Rosato hides her big heart beneath her tough-as-nails exterior, and she doesn’t consider failure an option. But Bennie was never able to do right by Jason Lefkavick, who was sent to a juvenile detention center for defending himself against a class bully. Years later, the case still haunts her. And now that Jason has ended up in trouble again, Bennie sees no choice but to help him.

Jason, who has spent most of his life in and out of prison, has been indicted for killing the same man who bullied him as a kid. Even though Bennie doesn’t know whether to believe Jason’s claims of innocence, she knows she owes him for past failures—of the law, of the juvenile justice system, and of her own. Forced to relive the darkest period of her life, Bennie will do everything in her power to find the truth. Even if doing so means risking what matters most to her. Because there are a few secrets Bennie has herself…and one man who is at the center of them.

“Fans will be on the edge of their seats.”—Library Journal (starred review)

Lisa Scottoline is the New York Times bestselling author of over thirty novels including Look Again, Lady Killer, Think Twice, Save Me and Everywhere That Mary Went. She also writes a weekly column, “Chick Wit,” with her daughter Francesca Serritella, for The Philadelphia Inquirer. The columns have been collected in seven volumes, including Why My Third Husband Will Be a Dog and My Nest Isn’t Empty, It Just Has More Closet Space. Scottoline has won an Edgar® Award and Cosmopolitan magazine’s “Fun Fearless Fiction” Award, and she served as the president of Mystery Writers of America. She teaches a course on justice and fiction at the University of Pennsylvania Law School, her alma mater. She lives in the Philadelphia area.

Praise for the Rosato & DiNunzio series:

“Pop culture's current crop of female lawyers owes a great deal to the attorney's at Rosato & Associates...After more than twenty novels, the Edgar Award-winning Scottoline is still able to create surprising, suspenseful plots with likable, daring heroines at the center.” —The Washington Post on Betrayed

“Scottoline writes terrific legal fiction with warmth, smart characters and lots of humor and heart. Her legions of fans will be happy with this one, and it should find her new readers as well.” —Booklist on Betrayed

“This is an author who knows what she wants to say and knows how to say it entertainingly.” —The Huffington Post on Betrayed

“After some rockin' stand-alones, Scottoline returns to her popular series about feisty all-female law firm Rosato & Assoc. Nice to have them back.” —People magazine on Accused

“One can almost hear the cheering from Scottoline's fans, including this reviewer, upon learning that the charming and often amusing ladies of Rosato & Associates have returned. Their personalities and antics burst from the pages, leaving readers wanting more.” —Portland Book Review on Accused

This months Riverstone Book Club selection The House Across the Lake: A Novel (Hardcover). END_OF_DOCUMENT_TOKEN_TO_BE_REPLACED