If You Weren't Here This Wouldn't Be Happening: plogs from my life (Paperback) 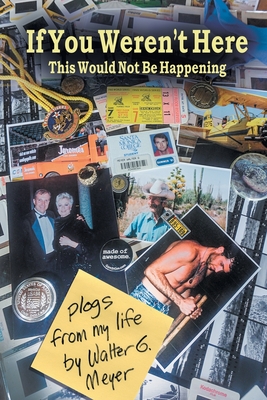 By Walter G. Meyer
Email or call for price

For many people, the COVID-19 shutdown allowed ample time to work on personal projects, spend time on social media, or simply reflect on one's life. Author Walter G. Meyer did all three, and the result was his new book, If You Weren't Here, This Would Not Be Happening: plogs from my life. Featuring dozens of humorous, tragic, and touching anecdotes from his self-described weird life, the book emerged from Meyer's attempts to distract himself from a crazy world. As it so happens, life is stranger than fiction.

Meyer has written everything from business books to a widely-produced comedy stage play, but when the shutdown began, he decided to entertain his Facebook friends - and himself- by publishing stories from his life. Committed to writing one post per day, he recalled unusual incidents, moments of serendipity, and encounters with eccentric characters, then wrote a lengthy Facebook post telling the story of the day. Readers have been amused and sometimes shed tears over his intriguing tales, and some noted that they were a bit long for Facebook posts. Meyer decided to call the stories "plogs," as they were posts bordering on blogs.

After several months of posting daily plogs, Meyer turned his tales into an anthology that blended memoir and humor along with a few life lessons. As he worked various odd jobs throughout his life to support his writing habit, including a comedy traffic school instructor, TV production assistant, and racquet club manager, Meyer has had some unusual experiences encompassing bizarre coincidences, crossing paths with celebrities, and moments one would usually only see in movies. For example, the title of the collection comes from something a friend said to Meyer while they were in the middle of a shootout in Washington, D.C. As Meyer notes in the book's first chapter, "Strange things do tend happen when I am around."

The plogs are organized by themes such as "Brushes with Greatness" and "True Tales from Traffic School." In each plog, Meyer recalls a strange incident with his distinctively humorous style of narrative. Using a mix of dialogue and witty exposition, Meyer deftly balances storytelling with social commentary and a little inspiration. Readers can indulge in the stories from start to finish, or hop around as they please, enjoying plogs ranging from quick one-minute reads to lengthier anecdotes.

Although Meyer fulfilled his childhood dream of becoming a successful writer and has published several award-winning works, he had never documented his own adventures so extensively. If You Weren't Here, This Would Not Be Happening is his celebration of a diverse, often thrilling life, from an appearance on "Jeopardy " to a photographing and tagging sea turtles. All "provided threads for the interesting tapestry of my life," says Meyer in the book's introduction.

Meyer says that he is not a clever enough writer to invent the craziness that has actually happened in his life that he documents in the plogs. His witty style and knack for telling big stories in a small format will make the collection enjoyable for readers of all walks of life.