102 Minutes: The Unforgettable Story of the Fight to Survive Inside the Twin Towers (Paperback) 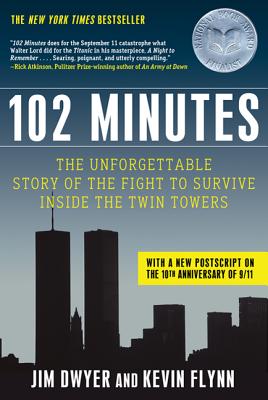 "102 Minutes does for the September 11 catastrophe what Walter Lord did for the Titanic in his masterpiece, A Night to Remember . . . Searing, poignant, and utterly compelling."—Rick Atkinson, Pulitzer Prize-winning author of An Army at Dawn

Hailed upon publication as an instant classic, the critically acclaimed New York Times bestseller and National Book Award Finalist for Nonfiction is now available in a revised edition to honor the anniversary of the attacks of September 11, 2001.

At 8:46 a.m. that morning, fourteen thousand people were inside the World Trade Center just starting their workdays, but over the next 102 minutes, each would become part of a drama for the ages. Of the millions of words written about this wrenching day, most were told from the outside looking in. New York Times reporters Jim Dwyer and Kevin Flynn draw on hundreds of interviews with rescuers and survivors, thousands of pages of oral histories, and countless phone, e-mail, and emergency radio transcripts to tell the story of September 11 from the inside looking out.

Dwyer and Flynn have woven an epic and unforgettable account of the struggle, determination, and grace of the ordinary men and women who made 102 minutes count as never before.

102 Minutes is a 2005 National Book Award Finalist for Nonfiction.

Jim Dwyer (1957-2020) is the author of six works of nonfiction, including More Awesome Than Money: Four Boys and Their Heroic Quest to Save Your Privacy from Facebook, 102 Minutes: The Untold Story of the Fight to Survive Inside the Twin Towers, and Subway Lives: 24 Hours in the Life of the New York Subways.

A Pulitzer Prize winner and native New Yorker, he was a columnist for The New York Times, The New York Daily News and Newsday.

Kevin Flynn, a special projects editor at The New York Times, was the newspaper's police bureau chief on September 11, having previously worked as a reporter for the New York Daily News, Newsday, and The Advocate (Stamford). He lives in Connecticut.

“A heart-stopping, meticulous account. . . . I suspect that you, like me, will read this book in a single suspenseful sitting, even though we know the ending.” —James B. Stewart, The New York Times Book Review

“The chief virtue of 102 Minutes, Jim Dwyer and Kevin Flynn's unsparing, eloquent history of the struggle to survive inside the World Trade Center, is the authors' insistence that truth supplant myth. However comforting myths may be after a defeat, they're useless in assessing what went wrong and may actually be impediments to preventing future disasters.” —John Farmer (former senior counsel to the 9/11 Commission), The Washington Post Book World

“An astounding reconstruction of what happened inside the World Trade Center. . . . These are stories, after all, you have to share.” —Susannah Meadows, Newsweek

“Exhaustively researched and smoothly written. . . . Dwyer and Flynn's most impressive achievement: writing in a way that confers dignity on each subject. This is one book that will stay with most readers for a very long time.” —Michelle Green, People

“For those of us haunted by the tragedy, an indispensable book.” —O Magazine

“A masterpiece of reporting....succinct...riveting enough to be read in a sitting...heart-wrenching...Brilliant and troubling.” —Kevin Baker, New York Times

“It took the authors three years to describe what happened in 102 minutes...The book is worth the wait.” —Ingrid Ahlgren, Providence Journal

“Many of the stories are astounding; almost all are heartbreaking...They accord these men and women the honor they deserve.” —Brian Palmer, Newsday