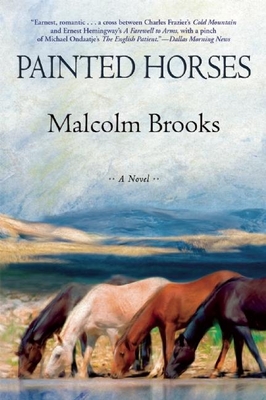 “Brooks sweeps post-WWII American prosperity, ancient native traditions, and the rush to tame the still-wild West together in a novel driven by diverse and deeply realized characters that come together in a heart-pounding story. Catherine Lemay is a talented young archeologist defying the traditions of a 'man's world' by accepting the challenge to explore a Montana canyon slated for flooding for hydroelectric power. What she discovers is beauty, history, threats, and John H - a former mustanger, Army veteran, and enigmatic canyon dweller. Far from her comfortable New York home, Catherine embraces Montana's stark conditions and with John H uncovers both secrets of the region and truths within herself. A breathtaking debut!”
— Cheryl McKeon, Book Passage, San Francisco, CA

"Engrossing . . . The best novels are not just written but built--scene by scene, character by character--until a world emerges for readers to fall into. Painted Horses creates several worlds in a seamless and ambitious blend of history, romance, archaeology and nature. . . . Hard to forget." --Bob Minzesheimer, USA Today (4 out of 4 stars) In the mid-1950s, America was flush with prosperity and saw an unbroken line of progress clear to the horizon, while the West was still very much wild. In Painted Horses, now in paperback, a dauntless woman travels into that untamed landscape in an adventure that will change her life. Catherine Lemay is a young archaeologist who's come to Montana with a huge task before her--a canyon "as deep as the devil's own appetites." Working ahead of a major dam project, she has one summer to prove nothing of historical value will be lost in the flood. From the moment she arrives, nothing is what she expects. John H is a former mustanger with an intuitive genius for breaking horses. A veteran of the U.S. Army's last mounted cavalry campaign, he lives a fugitive life, driven by pursuit of one last wild thing. John H inspires Catherine to see beauty in the stark landscape, and her heart opens to more than just the vanished past. Painted Horses sings a love song to the horseman's vanishing way of life and reminds us that love and ambition, tradition and progress, often make strange bedfellows. "Extraordinary . . . Surprising and satisfying . . . Brooks has fashioned compelling and sympathetic protagonists. . . . John H--orphan, rail rider, cowboy, World War II veteran, Paris artist, canyon hermit--in particular, has a backstory that is both intimate and sweeping in a way that may remind readers of Michael Ondaatje's The English Patient. . . . Painted Horses is, after all, one of those big, old-fashioned novels where the mundane and the unlikely coexist."--Kent Black, Boston Globe "Malcolm Brooks' novel has the hard thrill of the West, when it was still a new world, the tenderness of first love and the pain of knowledge. This book is a gripping, compulsively readable page-turner."--Amy Bloom, author of Away

Malcolm Brooks was raised in the rural foothills of the California Sierras, where Gold Rush and Native American artifacts still abound. A carpenter by trade, he has lived in Montana for most of two decades. His writing has appeared in Gray's Sporting Journal, Outside, Sports Afield, and Montana Quarterly, among others. Painted Horses is his first novel.