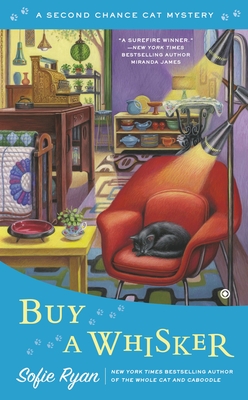 This is book number 2 in the Second Chance Cat Mystery series.

Things get stickey when Sarah Grayson and her cat, Elvis, must solve the murder of a troublesome baker in the second novel in the New York Times bestselling Second Chance Cat Mystery series.

Things have been quiet in the coastal town of North Harbor, Maine, since Sarah Grayson and her rescue cat, Elvis, solved their first murder. Sarah is happy running Second Chance, the shop where she sells lovingly refurbished and repurposed items. But then she gets dragged into a controversy over developing the waterfront. Most of the residents—including Sarah—are for it, but there is one holdout—baker Lily Carter.

So when Lily is found murdered in her bakery, it looks like somebody wanted to remove the only obstacle to the development. But Sarah soon discovers that nothing is as simple as it seems. Now, with the help of her cat’s uncanny ability to detect a lie, Sarah is narrowing down the suspects. But can she collar the culprit before the ruthless killer pounces again?

“A series sure to appeal to anyone who loves a combination of felonies and felines.”—Richmond Times-Dispatch

“Cleverly planned and flawlessly executed...full of humor, cat antics, intrigue and suspense...the best of both worlds for those who love cats and cozy mysteries.”—Open Book Society

“Enjoyable from beginning to end; readers will look forward to more.”—RT Book Reviews

“If you enjoy a cozy mystery featuring a lovable protagonist with a bevy of staunch friends, a shop you’d love to explore, plenty of suspects, and a super smart cat, you’ll love The Whole Cat and Caboodle.”—MyShelf.com

“Enjoyable...Remember, everyone has a secret, even the cat.”—Kings River Life Magazine

This months Riverstone Book Club selection The House Across the Lake: A Novel (Hardcover). END_OF_DOCUMENT_TOKEN_TO_BE_REPLACED