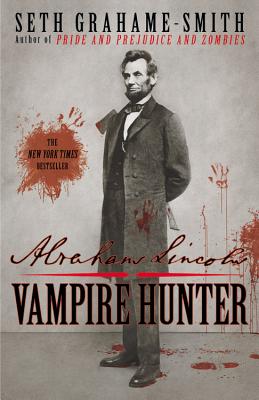 Indiana. Moonlight falls through the dense woods that surround a one-room cabin, where a nine-year-old Abraham Lincoln kneels at his suffering mother's bedside. She's been stricken with something the old-timers call "Milk Sickness."

"My baby boy..." she whispers before dying.

Only later will the grieving Abe learn that his mother's fatal affliction was actually the work of a vampire.

When the truth becomes known to young Lincoln, he writes in his journal, "henceforth my life shall be one of rigorous study and devotion. I shall become a master of mind and body. And this mastery shall have but one purpose..." Gifted with his legendary height, strength, and skill with an ax, Abe sets out on a path of vengeance that will lead him all the way to the White House.

While Abraham Lincoln is widely lauded for saving a and freeing millions of slaves, his valiant fight against the forces of the undead has remained in the shadows for hundreds of years. That is, until Seth Grahame-Smith stumbled upon The Secret Journal of Abraham Lincoln, and became the first living person to lay eyes on it in more than 140 years.

Using the journal as his guide and writing in the grand biographical style of Doris Kearns Goodwin and David McCullough, Seth has reconstructed the true life story of our greatest president for the first time-all while revealing the hidden history behind the Civil War and uncovering the role vampires played in the birth, growth, and near-death of our nation.

"Seth Grahame-Smith is an excellent writer whose prose raises Abraham Lincoln: Vampire Hunter a step above others of its genre...[He] does such an excellent job blending the facts of Lincoln's life into the story that it is sometimes hard to determine fact from fiction...Suspenseful, and most readers will want to read it in one sitting."— Asbury Park Press

"Evocative...Grahame-Smith [is] a lively, fluent writer with a sharp sense of tone and pace."—TIME

"Thanks to P&P&Z, a delicious mutant book craze was born. But then opportunists infested the territory...It's nice to see plucky Grahame-Smith retake his turf."—Entertainment Weekly

"Not just the Lincoln biography we've all been waiting for. It's also the funniest, most action-packed and weirdly well-researched account of the Civil War you'll probably read in a long time. Grahame-Smith could be poised to become the Howard Zinn of vampire-related alterna-history."—Vanity Fair

"Grahame-Smith does an excellent job of capturing the spirit of this style of story-telling, mixing historically accurate anecdotes with entries from Lincoln's fictional secret journal, weaving the vampire elements into the story in a manner that's quite believable."—Wired