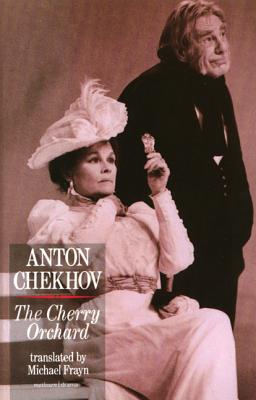 "Frayn's translation, which strikes me as splendidly lucid and alive...will be acted again and again" (New Statesman)

In Chekhov's tragi-comedy - perhaps his most popular play - the Gayev family is torn by powerful forces deeply rooted in history and the society in which they live. Their estate is hopelessly in debt and when urged to cut down their beautiful cherry orchard and sell the land for holiday cottages, they are confronted by an impossible decision. "At the time when The Cherry Orchard was written, the years before the revolution of 1905, Chekhov considered revolution in Russia irreversible and desirable." (Melchinger: Anton Chekhov)

Anton Chekhov (1860-1904) first turned to writing as a medical student at Moscow University, from which he graduated in 1884. Among his early plays were short monologues (The Evils of Tobacco, 1885), one-act farces such as The Bear, The Proposal and The Wedding (1888-89) and the 'Platonov' material, adapted by Michael Frayn as Wild Honey. The first three full-length plays to be stage, Ivanov (1887), The Wood Demon (1889) and The Seagull (1896) were initially failures. But the Moscow Arts Theatre's revival of The Seagull two years later was successful and was followed by his masterpieces, Uncle Vanya (1889), Three Sisters (1901), and The Cherry Orchard in 1904, the year of his death.

"Frayn's translation, which strikes me as splendidly lucid and alive…will be acted again and again"—New Statesman

This months Riverstone Book Club selection The House Across the Lake: A Novel (Hardcover). END_OF_DOCUMENT_TOKEN_TO_BE_REPLACED