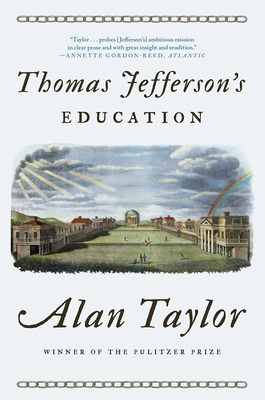 By turns entertaining and tragic, this elegant history reveals the origins of a great university in the dilemmas of Virginia slavery. Thomas Jefferson shares center stage with his family and fellow planters, but at the crux are the enslaved black families on whom they depend.

Taylor’s account of Jefferson’s campaign to save Virginia by building the university is dramatic, a contest for power and resources rich in political maneuver and eccentricities comic and cruel.

Alan Taylor has twice won the Pulitzer Prize in History, most recently for The Internal Enemy, also a National Book Award finalist. He is the Thomas Jefferson Foundation Professor of History at University of Virginia, and lives in Charlottesville.

[Taylor’s] overarching purpose [is] to demonstrate how the University of Virginia was from its very conception shaped and distorted by slavery.
— Drew Faust - Washington Post

Mr. Taylor does a splendid job of documenting the sordid goings-on at William & Mary and the University of Virginia, establishing how saturated in slavery they both were.
— Alan Pell Crawford - Wall Street Journal

No historian has more astutely investigated or more powerfully written about the early American republic than Alan Taylor. In Thomas Jefferson’s Education, Taylor adds to his previous prizewinning studies of early American politics, expansion, and arts and letters, with an examination of the founders’ vision of education, reckoning, at once, with its audacity and its timidity.

— Jill Lepore, author of These Truths: A History of the United States

Alan Taylor’s extraordinary new book illuminates the limits of republican reform in a society built on slavery. It is a major contribution to our understanding of Thomas Jefferson’s career as an educational reformer and to the history of democratic self-government in Virginia.
— Peter S. Onuf, Thomas Jefferson Foundation Professor Emeritus of History, University of Virginia

With characteristic eloquence, Alan Taylor chronicles the unlikely emergence of one of the most important experiments in American education: the University of Virginia. Caught between the promise of a new nation of freedom and the reality of a declining slave society, Thomas Jefferson and his allies forged an institution at once intellectually innovative and socially conservative. Taylor’s rich, evocative book captures the surprising drama of that invention.
— Edward L. Ayers, author of The Thin Light of Freedom