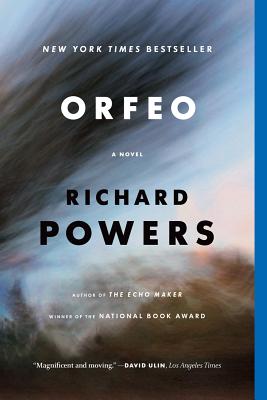 “Orfeo is the kind of novel that creeps slowly into a reader's consciousness and makes a home there. A beautiful, cerebral book that's as concerned with the past and how the decisions made by protagonist Peter Els shaped his personal philosophies and relationships and how music played a role in it all, as it is with the very real present and how Peter's hobbyist interest in DNA makes him an accidental bioterrorism threat. Orfeo is an intelligent and incredibly moving portrait of the role of art in both one man's life and society as a whole. Stunning!”
— Lauren Wiser, Left Bank Books, Saint Louis, MO

From the Pulitzer Prize–winning author of The Overstory, an emotionally charged novel inspired by the myth of Orpheus.

"Bravo, Richard Powers, for hitting so many high notes with Orfeo and contributing to the fraction of books that really matter." —Heller McAlpin, NPR

In Orfeo, composer Peter Els opens the door one evening to find the police on his doorstep. His home microbiology lab—the latest experiment in his lifelong attempt to find music in surprising patterns—has aroused the suspicions of Homeland Security. Panicked by the raid, Els turns fugitive and hatches a plan to transform this disastrous collision with the security state into an unforgettable work of art that will reawaken its audience to the sounds all around it.

Richard Powers is the author of thirteen novels, including The Overstory and Orfeo, and the recipient of a MacArthur Fellowship, the Pulitzer Prize, and the National Book Award. He lives in the foothills of the Great Smoky Mountains.

Powers is prodigiously talented…He writes lyrical prose, has a seductive sense of wonder and is an acute observer of social life…I [was] unable to resist the emotional pull of Orfeo.

Powers proves, once again, that he’s a master of the novel with Orfeo, an engrossing and expansive read that is just as much a profile of a creative, obsessive man as it is an escape narrative.

Orfeo is that rare novel truly deserving of the label 'lyrical.'…Powers offers a profound story whose delights are many and lasting.

Orfeo benefits from the deep sympathy Powers seems to feel for the brilliant and troubled protagonist he has created…[It] establishes beyond any doubt that the novel is very much alive.

Extraordinary…his evocations of music, let alone lost love, simply soar off the page…Once again, Richard Powers proves himself to be one of our finest novelists.
— Dan Cryer - Newsday

Part of the fun of reading [Powers] is to see how he wriggles out of his own snares. But a greater thrill is to join with him in untangling the most urgent and confounding puzzles of our age.
— Nathaniel Rich - New York Review of Books

For sheer bravado in constructing sentences, few authors of contemporary fiction can surpass Powers…One of his finest yet.
— Ted Gioia - San Francisco Chronicle

Powers’ writing is complex and heady without being headachy, and his synesthetic descriptions of finding melodies in the mundane are full of their own kind of music.
— Entertainment Weekly

Biology and music, past and present, come together in a clever, explosive resolution.
— Adam Kirsch - Boston Globe

One long express-train ride to the gorgeous. And the scenery is as sublime as ever.
— Laura Miller - Salon