Plagued by Fire: The Dreams and Furies of Frank Lloyd Wright (Hardcover) 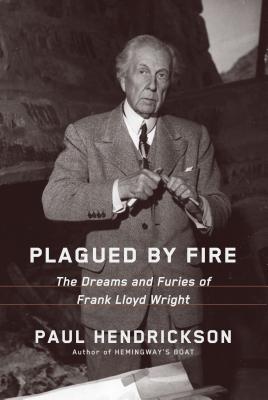 By Paul Hendrickson
$35.00
Email or call for price.

Frank Lloyd Wright has long been known as a rank egotist who held in contempt almost everything aside from his own genius. Harder to detect, but no less real, is a Wright who fully understood, and suffered from, the choices he made.

This is the Wright whom Paul Hendrickson reveals in this masterful biography: the Wright who was haunted by his father, about whom he told the greatest lie of his life. And this, we see, is the Wright of many other neglected aspects of his story: his close, and perhaps romantic, relationship with friend and early mentor Cecil Corwin; the eerie, unmistakable role of fires in his life; the connection between the 1921 Black Wall Street massacre in Tulsa, Oklahoma, and the murder of his mistress, her two children, and four others at his beloved Wisconsin home.

In showing us Wright’s facades along with their cracks, Hendrickson helps us form a fresh, deep, and more human understanding of the man. With prodigious research, unique vision, and his ability to make sense of a life in ways at once unexpected, poetic, and undeniably brilliant, he has given us the defining book on Wright.

Paul Hendrickson is the author of the New York Times bestseller and National Book Critics Circle Award finalist, Hemingway’s Boat, and Sons of Mississippi, which won the 2003 National Book Critics Circle Award. Since 1998 he has been on the faculty of the Creative Writing Program at the University of Pennsylvania. For two decades before that, he was a staff writer at The Washington Post. Among his other books are Looking for the Light (1992 finalist for the NBCC award) and The Living and the Dead (1996 finalist for the National Book Award). He has been the recipient of writing fellowships from the Guggenheim Foundation, the National Endowment for the Arts, the Lyndhurst Foundation, and the Alicia Patterson Foundation. He is the father of two grown sons, both of whom work in media, and he lives with his wife, Cecilia, a retired nurse, in Washington, D.C., and outside Philadelphia.

“Hendrickson. . . employs tremendously rigorous research to interrogate the myths that hang around his larger-than-life subject. His is not an effort to exonerate (or make excuses for the bad behavior of yet another white male artist!) but to dig deeply into who Frank Lloyd Wright really was. . . Hendrickson’s persistent and expansive curiosity, which has driven books on the Vietnam era and the American South, among other subjects, also takes readers beyond Wright in important, revelatory ways. . . Passing through [Wright’s] darknesses makes you see his buildings, and all that flow, beauty and light, in a new way.”—John Glassie, The Washington Post

“Hendrickson has designed a vast, sweeping book, one that, along the way, corrects some of the canards told by Wright himself. . . In his hands Wright’s life emerges with new clarity as a Shakespearean scale drama. . . Hendrickson makes it impossible to leave this book without a bigger thought about structures and the dramas that play out within them: that creating a building can be an act of love but also of risk—more for some than for others.”—John Freeman, The Wall Street Journal

"Art history, in general, is often infected with one of two diametrically opposed ailments: an obsession with an artist or architect’s biography, or a willful ignorance. . . Hendrickson’s background in journalism is what makes Plagued by Fire such a wonderful addition to our understanding of Wright. . .  [The book] is not seeking to validate the field of art history or Modern art. While Hendrickson clearly appreciates the architect and his work, Wright is not above his critical examination."—Chris Naffziger, St. Louis Magazine

“Hendrickson’s focus is on the all-too-often overlooked evidence of Wright’s own vulnerabilities, so the book’s most moving passages come from fresh insights from the architect’s archives. . . Plagued by Fire aims not to examine the work of an architect but rather to render the architect with human character.”—John Gendall, Architectural Digest

"The contradictory Wright who emerges, both hateful and human, is probably the truest portrait of the man we have yet."—Marcus Field, Evening Standard

“Resisting the myths and hagiography of Wright, Hendrickson wears his encyclopedic knowledge of the architect’s creations lightly and evokes the emotional and psychological life of this gifted man who was cursed by regret and remorse stemming from tragic, racially charged conflagrations in his life. Hendrickson is distinguished by his brilliant ability to find just the right angles on each of his disparate subjects, with multiple perspectives inspiring a whole new way of seeing an American icon.”—The National Book Review

“Compelling. . . There is always something slightly appalling about genius, and what Hendrickson achieves is to humanize his subject. . . By humanizing his subject—and without resorting to armchair psychoanalysis—Hendrickson gives us a sense of how the single-mindedness, drive, and sensibility that informed and enabled Wright’s work also affected his life.”—Witold Rybczynski, Architect Magazine

“Hendrickson is one of our great stylists.”—Boston Globe

“Paul Hendrickson has made a life of taking the figures we think we know, and revealing how little we actually understood them. From the depression-era photographer Marion Post Wolcott to the war-maker Robert McNamara and the writer Ernest Hemingway, his subjects tend to be complex, ambitious men and women caught in the thrust of outsized times. Hendrickson has his work cut out for him with Wright, certainly the most written about architect in the world. Yet this, his longest book might be his most beautifully written—there’s a tone of absolute curiosity and respect, a judiciousness about probing a long-dead psyche, and a depth of understanding about how hidden demons often contribute to the art that artists make which [makes] this book absolutely riveting, as if all the buildings it describes have yet to be built.” —John Freeman, Executive Editor, Literary Hub

"Hendrickson is a researcher of unquenchable curiosity. . . as [he] travels the arc of Wright’s life, his investigation into its deepest mysteries achieves a powerful momentum. Wright was a genius, an egotist, and a man tormented by conscience and regret, and Hendrickson’s inspired storytelling is worthy of its subject.”—Mary Ann Gwinn, Booklist (starred review)

“Paul Hendrickson has a voice. He hasn't written a line that lies flat on the page; his every sentence crinkles and burns with intelligence. In Plagued by Fire, he transmutes the story of America's greatest architect into something unexpected and immediate—a life inscribed by race, fire, murder, and loss, all inseparable from creative brilliance. Like Hendrickson himself, this book is indispensable.” —T. J. Stiles, two-time winner of the Pulitzer Prize

“Paul Hendrickson's beautifully composed, revelatory Plagued by Fire brilliantly combs through the tangled web Frank Lloyd Wright wove around his long-lived, complicated self. Written as if it's a detective story, which in a way it is, this wonderfully unconventional biography captures Wright's artistry while it plumbs the depths of his vulnerability, his compulsions, his work ethic, his cruelties, his defensiveness—and his humanity. What emerges is biography on a grand scale, large enough to encompass the restless, haunted architect who lived, breathed, and was burned by the twentieth century. Not to be missed.” —Brenda Wineapple, author of The Impeachers: The Trial of Andrew Johnson and the Dream of a Just Nation

“A masterful portrait of the flawed creator of flawless buildings.”—Simon Jenkins, author of A Short History of Europe

“Opening Paul Hendrickson's Plagued by Fire: The Dreams and Furies of Frank Lloyd Wright is a bit like first encountering Faulkner. You enter a lapidary universe: multi-layered, multiv-dimensional, linear and circular, often at the same time. Time? Hendrickson zooms around the narrative in a brilliantly literary time machine, strategically reminding the reader where she's been, where she's going and where she's going back again. He builds no less than a Wrightian structure with words, filled with light and air, porous to the world outside, exquisitely finished and furnished. Coming after so many biographies of Wright, Hendrickson's aim is to discover and reveal the complicated, deeply hidden goodness of the man. Like all great biographers, he knows and shows that any such quest arrives at an elusive, human mystery.” —Kate Buford, author of Burt Lancaster: An American Life

“Paul Hendrickson has managed to take the life of one of the most complex and difficult of American artists and restore some measure of human-ness to him in this riveting work.” —Ken Burns

“This is a biography worthy of the complexity of America’s iconic 20th Century architect. It describes Wright’s facade and flaws, but then reaches down to the deep emotional underpinnings of his brilliant but at times difficult personality. By understanding the turmoil of his life, Hendrickson makes Wright more sympathetic.” —Walter Isaacson, author of Leonardo Da Vinci

“I’ve long admired Paul Hendrickson for his uncommonly humane biographical portrait of Ernest Hemingway. In Plagued by Fire, he takes up another enigmatic and supremely American artist, Frank Lloyd Wright, in a rendering that’s astonishingly artful and perceptive—piercing the Gordian difficulties of the man with rare sensitivity and intelligence. There are very few biographers today writing at Hendrickson’s level. No one will walk away from this book without a deepened and transformed view of Wright’s life and times.”   —Paula McLain, author of Love and Ruin

“In his fascinating Hemingway's Boat, Paul Hendrickson accomplished the miracle of making us see Hemingway afresh, and now does the same for Frank Lloyd Wright. A first-rate reporter and storyteller, Hendrickson not only explains Wright's architecture in terms any layman can appreciate, but also connects that monolithic achievement with a living, breathing human being—an egomaniac and huckster, yes, but also a haunted, touching man who never, never gave up. Quite simply, you don't know the whole story until you read this book.” —Blake Bailey, author of Cheever: A Life