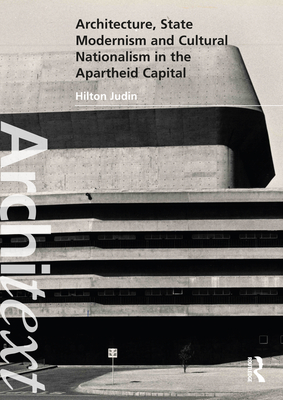 This book is the first comprehensive investigation of the architecture of the apartheid state in the period of rapid economic growth and political repression from 1957 to 1966 when buildings took on an ideological role that was never remote from the increasingly dominant administrative, legislative and policing mechanisms of the regime. It considers how this process reflected the usurpation of a regional modernism and looks to contribute to wider discourses on international postwar modernism in architecture.

Buildings in Pretoria that came to embody ambitions of the apartheid state for industrialisation and progress serve as case studies. These were widely acclaimed projects that embodied for apartheid officials the pursuit of modernisation but carried latent apprehensions of Afrikaners about their growing economic prospects and cultural estrangement in Africa. It is a less known and marginal story due to the dearth of material and documents buried in archives and untranslated documents. Many of the documents, drawings and photographs in the book are unpublished and include classified material and photographs from the National Nuclear Research Centre, negatives of 1960s from Pretoria News and documents and pamphlets from Afrikaner Broederbond archives.

State architecture became the most iconic public manifestation of an evolving expression of white cultural identity as a new generation of architects in Pretoria took up the challenge of finding form to their prospects and beliefs. It was an opportunistic faith in Afrikaners who urgently needed to entrench their vulnerable and contested position on the African continent. The shift from provincial town to apartheid capital was swift and relentless. Little was left to stand in the way of the ambitions and aim of the state as people were uprooted and forcibly relocated, structures torn down and block upon block of administration towers and slabs erected across Pretoria.

This book will be of great interest to students and scholars of architectural history as well as those with an interest in postcolonial studies, political science and social anthropology.

Hilton Judin is an architect and Director of Postgraduate Architecture at the School of Architecture & Planning at Wits University. He has developed a number of exhibitions, including a display of apartheid state documents and public video testimonies [setting apart] with the History Workshop in Johannesburg and District Six Museum in Cape Town. He was curator and editor (with Ivan Vladislavic) of blank____ Architecture, apartheid and after for the Netherlands Architecture Institute. He was in practice with Nina Cohen on the Nelson Mandela Museum in Mvezo and Qunu, and Living Landscape Project in Clanwilliam. He edited the volume Falling Monuments, Reluctant Ruins: Persistence of the Past in the Architecture of Apartheid. He is working on the Political Evolution of Community Building, and with the History Workshop on the conference and anthology In Whose Place? Confronting the Vestiges of the Colonial Landscape in Africa. He continues with compilation of an Anatomy of Apartheid.

This months Riverstone Book Club selection The House Across the Lake: A Novel (Hardcover). END_OF_DOCUMENT_TOKEN_TO_BE_REPLACED