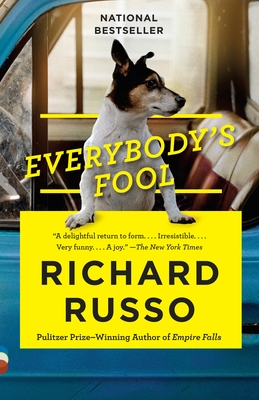 “While any new book from Richard Russo is a cause for celebration, to have one that revisits the characters from a beloved classic feels like a gift from the literary gods. Everybody's Fool returns to North Bath, New York, the setting for Russo's breakout novel from 1993, Nobody's Fool. No one writes better about the quirks, petty jealousies, hard times, humor, and heartbreak of small-town America. Everybody's Fool is good, old-fashioned storytelling at its finest!”
— Shawn Donley (E), Powell's Books, Inc, Portland, OR

In these pages, Richard Russo returns to North Bath, the Rust Belt town first brought to unforgettable life in Nobody’s Fool. Now, ten years later, Doug Raymer has become the chief of police and is tormented by the improbable death of his wife—not to mention his suspicion that he was a failure of a husband. Meanwhile, the irrepressible Sully has come into a small fortune, but is suddenly faced with a VA cardiologist’s estimate that he only has a year or two left to live.

As Sully frantically works to keep the bad news from the important people in his life, we are reunited with his son and grandson . . . with Ruth, the married woman with whom he carried on for years . . . and with the hapless Rub Squeers, who worries that he and Sully aren’t still best friends. Filled with humor, heart, and hard-luck characters you can’t help but love, Everybody’s Fool is a crowning achievement from one of the great storytellers of our time.

Richard Russo is the author of seven previous novels; two collections of stories; and Elsewhere, a memoir. In 2002 he received the Pulitzer Prize for Empire Falls, which like Nobody’s Fool was adapted to film, in a multiple-award-winning HBO miniseries.

“Elegiac but never sentimental. . . . Russo’s compassionate heart is open to the sorrows, and yes, the foolishness of this lonely world, but also the humor, friendship and love that abide.” —San Francisco Chronicle

“For fans who’ve missed Sully and the gang, Everybody’s Fool is like hopping on the last empty barstool surrounded by old friends.” —Entertainment Weekly