The Consequences of Fear: A Maisie Dobbs Novel (Paperback) 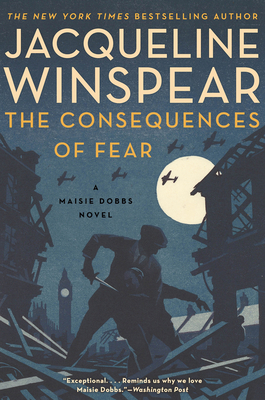 This is book number 16 in the Maisie Dobbs series.

October 1941. While on a delivery, young Freddie Hackett, a message runner for a government office, witnesses an argument that ends in murder. Crouching in the doorway of a bombed-out house, Freddie waits until the coast is clear. But when he arrives at the delivery address, he’s shocked to come face to face with the killer.

Dismissed by the police when he attempts to report the crime, Freddie goes in search of a woman he once met when delivering a message: Maisie Dobbs. While Maisie believes the boy and wants to help, she must maintain extreme caution: she’s working secretly for the Special Operations Executive, assessing candidates for crucial work with the French resistance. Her two worlds collide when she spots the killer in a place she least expects. She soon realizes she’s been pulled into the orbit of a man who has his own reasons to kill—reasons that go back to the last war.

As Maisie becomes entangled in a power struggle between Britain’s intelligence efforts in France and the work of Free French agents operating across Europe, she must also contend with the lingering question of Freddie Hackett’s state of mind. What she uncovers could hold disastrous consequences for all involved in this compelling chapter of the “series that seems to get better with every entry” (Wall Street Journal).

Jacqueline Winspear is the author of the New York Times bestsellers The Consequences of Fear, The American Agent, and To Die but Once, as well as thirteen other bestselling Maisie Dobbs novels and The Care and Management of Lies, a Dayton Literary Peace Prize finalist. Jacqueline has also published two nonfiction books, What Would Maisie Do? and a memoir, This Time Next Year We’ll Be Laughing. Originally from the United Kingdom, she divides her time between California and the Pacific Northwest.

“Over 16 novels spanning three decades, Winspear’s Maisie Dobbs has lived. In real life, her quiet bravery, compassion and dogged pursuit of the truth would have made her one of the Greatest Generation, a lesson in survival under the grimmest circumstances. The lessons are hard-won in The Consequences of Fear, set in the fall of 1941 but no less relevant today…. Fans and newcomers to the series will root for Dobbs and the other well-drawn characters.” — Los Angeles Times

“Exceptional…. An intriguing series that entertains and inspires…. Winspear’s latest novel reminds us why we love Maisie Dobbs.”  — Washington Post

"Once again, Ms. Winspear brings a vanished era to life with clarity and insight. Maisie Dobbs—businesswoman, widow, single mother of an adopted little girl, lady-friend of a dashing American diplomat—continues to mature and impress in her admirable mission to balance the scales of justice."  — Wall Street Journal

“Fresh and compelling…. Winspear’s sense of place is acutely evocative of wartime England’s fears and hopes. Dobbs remains a particularly strong and well-crafted character, with a compelling back story; the same can be said for her devoted friends, family and colleagues.” — Seattle Times

“Outstanding…. Maisie and her loving family of supporting characters continue to evolve and grow in ways sure to win readers’ hearts. Winspear is writing at the top of her game.” — Publishers Weekly, starred review

“Fast-paced . . . Winspear never sugarcoats the horrors of war, and alongside the camaraderie shown by these characters and the Londoners surrounding them she delivers terrible truths that must be endured. . . . also recommend it as a less- weighty read-alike for Anthony Doerr’s All the Light We Cannot See.” — Booklist, starred review

"A fast-paced tale of mystery and spycraft whose exploration of inner doubts and fears makes it much more." — Kirkus

“Like Winspear’s other novels, this one explores the characters’ minds, examining not only the facts but also the human psyche. VERDICT: A must-read for Maisie Dobbs fans, this is an excellent fit for readers of historical and thoughtful mysteries.” — Library Journal

This months Riverstone Book Club selection The House Across the Lake: A Novel (Hardcover). END_OF_DOCUMENT_TOKEN_TO_BE_REPLACED