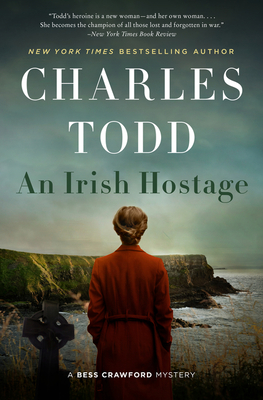 This is book number 12 in the Bess Crawford Mysteries series.

“[Readers] are bound to be caught up in the adventures of Bess Crawford . . . While her sensibility is as crisp as her narrative voice, Bess is a compassionate nurse who responds with feeling.”— The New York Times Book Review

In the uneasy peace following World War I, nurse Bess Crawford runs into trouble and treachery in Ireland—in this twelfth book in the New York Times bestselling mystery series.

The Great War is over—but in Ireland, in the wake of the bloody 1916 Easter Rising, anyone who served in France is now considered a traitor, including nurse Eileen Flynn and former soldier Michael Sullivan, who only want to be married in the small, isolated village where she grew up. Even her grandmother is against it, and Eileen’s only protection is her cousin Terrence who was a hero of the Rising and is still being hunted by the British.

Bess Crawford had promised to be there for the wedding. And in spite of the danger to her, she keeps that promise—only to be met with the shocking news that the groom has vanished. Eileen begs for her help, but how can Bess hope to find him when she doesn’t know the country, the people, or where to put her trust? Time is running out, for Michael and for Bess herself, and soon her own life is on the line. With only an Irish outlaw and a man being hunted for murder on her side, how can she possibly save herself, much less stop a killer?

"So much happens within this complex plot, and there is a level of suspense throughout the book that readers of the previous 11 novels haven’t experienced. Those who are aware of the historical events that drive this story will find themselves torn between the sentiments of the British and Irish characters. An Irish Hostage is yet another triumph for Charles Todd and one of the most memorable additions to the series." — Book Reporter on An Irish Hostage

"The Crawford series has been consistently strong, each book as crisply written and suspenseful as the last." — Booklist on An Irish Hostage

“A captivating mystery of treachery and bravery during the post WWI Irish troubles!” — Fresh Fiction on An Irish Hostage

“[Readers] are bound to be caught up in the adventures of Bess Crawford . . . While her sensibility is as crisp as her narrative voice, Bess is a compassionate nurse who responds with feeling.”
— The New York Times Book Review

"Bess is among the most compassionate and intelligent characters, whose observations on life and people are advanced for the era in which she lives.." — The Sun-Sentinel (Florida)

“Intensely personal, as all great stories should be.” — Anne Perry, Internationally Bestselling Author

"As always, the mother-son writing team of Charles Todd does a magnificent job with atmosphere and dialogue, all while keeping their good-hearted heroine one step (but only one) ahead of the bad guys .” — BookPage on A Cruel Deception

“I love series that follow particular characters over time and through their experiences, so I automatically read the latest installments from . . . Charles Todd.” — Hillary Rodham Clinton, New York Times Book Review

"As usual, Todd mixes historical verisimilitude with exemplary character design and sharp plotting. Another fine entry in this popular series.” — Booklist on A Cruel Deception

“As with all other Bess Crawford mysteries, this one is historically accurate, entertainingly written, and thoroughly enjoyable.”  — New York Journal of Books on A Cruel Deception

This months Riverstone Book Club selection The House Across the Lake: A Novel (Hardcover). END_OF_DOCUMENT_TOKEN_TO_BE_REPLACED