The Affliction: A Novel (Paperback) 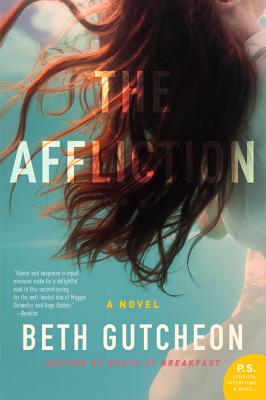 The New York Times bestselling author of More Than You Know, Leeway Cottage, and Death at Breakfast delivers the second installment in her clever romp of a mystery series combining social comedy and dark-hearted murder—a novel set at a girls’ boarding school in a picturesque Hudson River town with more than its share of secrets.

Since retiring as head of a famous New York City private school, Maggie Detweiler is busier than ever. Chairing a team to evaluate the faltering Rye Manor School for girls, she will determine whether, in spite of its fabled past, the school has a future at all. With so much on the line for so many, tensions on campus are at an excruciating pitch, and Maggie expects to be as welcome as a case of Ebola virus.

At a reception for the faculty and trustees to "welcome" Maggie’s team, no one seems more keen for all to go well than Florence Meagher, a star teacher who is loved and respected in spite of her affliction—that she can never stop talking.

Florence is one of those dedicated teachers for whom the school is her life, and yet the next morning, when Maggie arrives to observe her teaching, Florence is missing. Florence’s husband, Ray, an auxiliary policeman in the village, seems more annoyed than alarmed at her disappearance. But Florence’s sister is distraught. There have been tensions in the marriage, and at their last visit, Florence had warned, "If anything happens to me, don’t assume it’s an accident."

Maggie is asked to stay on to coach the very young and inexperienced head of Rye Manor through the crisis. Maggie obviously knows schools, but she also knows something about investigating murder, having solved a mysterious death in Maine the previous year when the police went after the wrong suspect. She is soon joined by her madcap socialite friend Hope, who is jonesing for an excuse to ditch her book club anyway, before she has to actually read Silas Marner.

What on earth is going on in this idyllic town? Is this a run-of-the-mill marital murder? Or does it have something to do with the school board treasurer’s real estate schemes? And what is up with the vicious cyber-bullying that’s unsettled everyone, or with the disturbed teenaged boy whom Florence had made a pet of? And is it possible that someone killed Florence just so she’d finally shut up?

Beth Gutcheon is the critically acclaimed author of the novels, The New Girls, Still Missing, Domestic Pleasures, Saying Grace, Five Fortunes, More Than You Know, Leeway Cottage, and Good-bye and Amen. She is the writer of several film scripts, including the Academy-Award nominee The Children of Theatre Street. She lives in New York City.

“Humor and suspense in equal measure make for a delightful read in this second outing...for the well-heeled duo of Maggie Detweiler and Hope Babbin.”
— Booklist

“Maggie and Hope aren’t like the biddies of old English mysteries, picking up clues over tea and stuffing them for safekeeping in their knitting baskets. They’re sharp and youthful, and the good news is that they’re even sharper in The Affliction.” — Head Butler

This months Riverstone Book Club selection The House Across the Lake: A Novel (Hardcover). END_OF_DOCUMENT_TOKEN_TO_BE_REPLACED