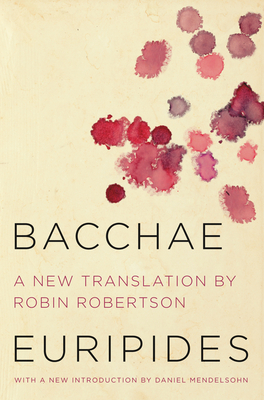 Thebes has been rocked by the arrival of Dionysus, the god of wine and ecstasy. Drawn by the god’s power, the women of the city have rushed to worship him on the mountain, drinking and dancing with frenzied abandon.

Pentheus, the king of Thebes, is furious, denouncing this so-called “god” as a charlatan and an insurgent. But no mortal can deny a god, much less one as powerful and seductive as Dionysus, who will exact a terrible revenge on Pentheus, drawing the king to his own tragic destruction.

This stunning translation by award-winning poet Robin Robertson reinvigorates Euripides’ masterpiece. Updating it for contemporary readers, he brings the ancient verse to fervid, brutal life, revealing a work of art as devastating and relevant today as it was in the fifth century, BC.

Robin Robertson is from the northeast coast of Scotland. He has published five collections of poetry and received a number of accolades, including the Petrarca-Preis, the E. M. Forster Award from the American Academy of Arts and Letters, and a Forward Prize in each category. Apart from his translations of Euripides, he has also edited a collection of essays, Mortification: Writers' Stories of Their Public Shame, and, in 2006, he published The Deleted World, a selection of free English versions of poems by the Nobel laureate Tomas Tranströmer.

Daniel Mendelsohn a frequent contributor to The New York Review of Books and The New Yorker, is the author of the international bestseller The Lost: A Search for Six of Six Million. He teaches at Bard College.

This months Riverstone Book Club selection The House Across the Lake: A Novel (Hardcover). END_OF_DOCUMENT_TOKEN_TO_BE_REPLACED