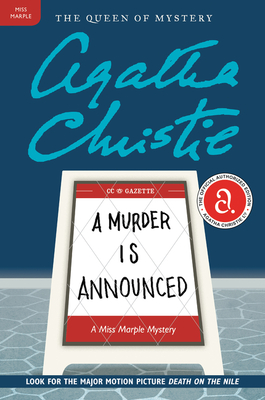 This is book number 5 in the Miss Marple Mysteries series.

In this exclusive authorized edition from the Queen of Mystery, A Murder is Announced in a small-town newspaper advertisement—and Miss Marple must unravel the fiendish puzzle when a crime does indeed occur.

The villagers of Chipping Cleghorn are agog with curiosity when the Gazette advertises “A murder is announced and will take place on Friday, October 29th, at Little Paddocks at 6.30 p.m.”

A childish practical joke? Or a spiteful hoax? Unable to resist the mysterious invitation, the locals arrive at Little Paddocks at the appointed time when, without warning, the lights go out and a gun is fired. When they come back on, a gruesome scene is revealed. An impossible crime? Only Miss Marple can unravel it.

Agatha Christie is the most widely published author of all time, outsold only by the Bible and Shakespeare. Her books have sold more than a billion copies in English and another billion in a hundred foreign languages. She died in 1976, after a prolific career spanning six decades.

“Agatha Christie gave readers the world over a vivid sense of English life, especially in her depiction of the small village where nothing happen—until, of course, a murder is discovered.”
— Jacqueline Winspear, New York Times bestselling author of the Maisie Dobbs novels

“A super-smooth Christie—three neat murders in an English village, [and] an assortment of her famous red herrings, all beautifully marinated.”
— New York Times

“Establishes firmly her claim to the throne of detection. The plot is as ingenious as ever…the dialogue both wise and witty; while the suspense is maintained very skilfully until the final revelation.”
— A. A. Milne

This months Riverstone Book Club selection The House Across the Lake: A Novel (Hardcover). END_OF_DOCUMENT_TOKEN_TO_BE_REPLACED