No Mark upon Her (Duncan Kincaid/Gemma James Novels #14) (Paperback) 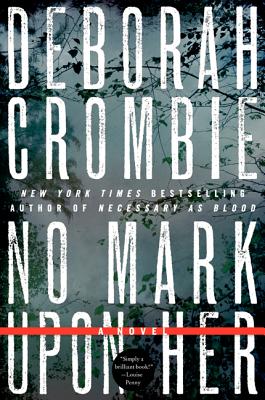 This is book number 14 in the Duncan Kincaid/Gemma James Novels series.

A finely-hued and twisting tale of psychological suspense—a story rich in deadly secrets, salacious lies, and unexpected betrayals—No Mark Upon Her is everything New York Times bestseller Deborah Crombie's fans have come to expect from this exceptional writer . . . and more.

Olympic rowing hopeful and Metropolitan Police officer DCI Rebecca Meredith goes out to train on the river in Henley on a dark afternoon in late October. When, the following morning, her ex-husband realizes she hasn’t returned, a search is instituted and a K9 search and rescue team finds Meredith’s body in the river.

Scotland Yard superintendent Duncan Kincaid, returning from a family celebration of his marriage to Inspector Gemma James, is called to investigate Meredith’s death. He soon finds that both Meredith’s rowing colleagues and her ex-husband might have had good reason to want her dead. But when an attempt is made on the life of one of the search and rescue team members who found Meredith’s body, Kincaid realizes the case may be more complex and more dangerous than he believed.

It is Gemma, however, who discovers that Meredith’s murder may be connected to enemies within the heart of the Met itself, and together Duncan and Gemma must endanger their careers and their lives to bring the killer to justice. . .

“Crombie is very talented at putting together a richly atmospheric whodunit.... [A]s a creator, she energetically inhabits the many strange worlds she shows her readers....” — Washington Post

“Ms. Crombie again has turned out a gripping and nicely tailored mystery and added another chapter to her chronicle of Kincaid and Jones.” — Washington Times

“No Mark Upon Her is again deserving of fans’ devotion due largely to her intelligent, subtle wit and above all, her meticulous attention to detail, from sculling equipment and competitive jealousy to a 3-year-old’s birthday party meltdown to the deep bond between a man and his dog.” — Miami Herald

“Her writing is sophisticated and her suspense taut.” — Milwaukee Journal Sentinel

[A] psychological thrill-ride that explores the allure of power, the pull of jealousy, and the seduction of greed. — The Tuscon Citizen

This is a lovely, satisfying British police procedural with many relationship subplots that lend texture. — Suspense magazine

This months Riverstone Book Club selection The House Across the Lake: A Novel (Hardcover). END_OF_DOCUMENT_TOKEN_TO_BE_REPLACED