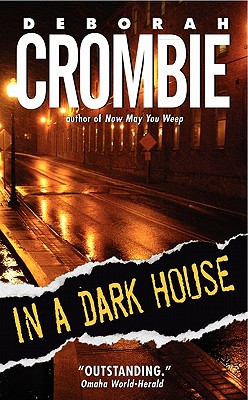 This is book number 10 in the Duncan Kincaid/Gemma James Novels series.

An abandoned Southwark warehouse burns next door to a women's shelter for victims of spousal abuse. Within it lies the charred corpse of a female body burned beyond all recognition. At the same time, workers at Guy's Hospital anxiously discuss the disappearance of a hospital administrator -- a beautiful, emotionally fragile young woman who's vanished without a trace.

And in an old, dark, rambling London house, nine-year-old
Harriet's awful fears won't be silenced -- as she worries about her
feuding parents, her schoolwork . . . and the strange woman who
is her only companion in this scary, unfamiliar place.

Gemma James and Duncan Kincaid -- lovers and former partners -- have their own pressing concerns. But they must put aside private matters to investigate these disturbing cases. Yet neither Gemma nor Duncan realize how closely the cases are connected -- or how important their resolutions will be for an abducted young child who is frightened, alone . . . and in serious peril.

“A master of the modern British mystery...one writer who gets better with every book.” — Harrisburg Patriot News

“An uncanny affinity for the English detective genre...Her characters are three-dimensional and are drawn with compassion and sensitivity.” — Dallas Morning News

In this dark house, the author’s light shines brightly. — Richmond Times-Dispatch on In a Dark House

This months Riverstone Book Club selection The House Across the Lake: A Novel (Hardcover). END_OF_DOCUMENT_TOKEN_TO_BE_REPLACED