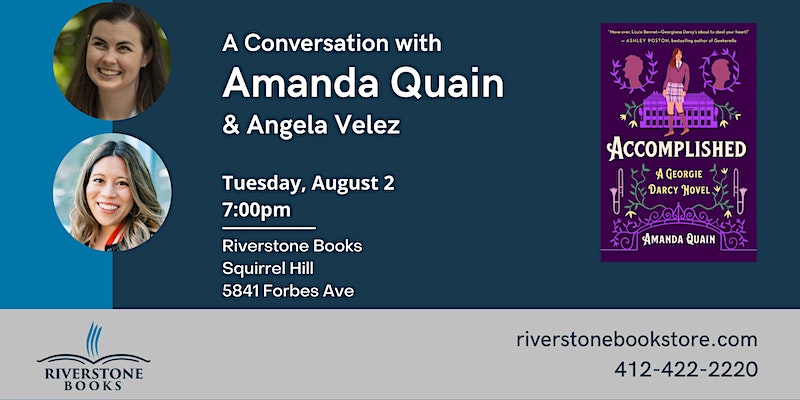 Pittsburgh author Amanda Quain discusses her new novel ACCOMPLISHED with Angela Velez. An unmissable evening for fans of YA and Jane Austen!

Georgiana Darcy gets the Pride & Prejudice retelling she deserves in Amanda Quain's Accomplished, a sparkling contemporary YA featuring a healthy dose of marching band romance, endless banter, and Charles Bingley as a ripped frat boy.

It is a truth universally acknowledged that Georgiana Darcy should have been expelled after The Incident with Wickham Foster last year – at least if you ask any of her Pemberley Academy classmates. She may have escaped expulsion because of her family name, but she didn’t escape the disappointment of her big brother Fitz, the scorn of the entire school, or, it turns out, Wickham’s influence.

But she’s back for her junior year, and she needs to prove to everyone – Fitz, Wickham, her former friends, and maybe even herself – that she’s more than just an embarrassment to the family name. How hard can it be to become the Perfect Darcy?

Amanda Quain is a writer, indie bookseller, and general life enthusiast. When she’s not shouting about her favorite new books, she loves theatre, baking, rock climbing, marching band, and the overall pursuit of adventure. If forced to choose, Amanda’s favorite Austen hero is Edward Ferrars, though she’ll always have a soft spot for Mr. Bingley. She lives in Pittsburgh, Pennsylvania with her husband and their cat. She is the author of Accomplished and The Ghosts are a Metaphor.

Angela Velez grew up in Baltimore, under the watchful eye of her Peruvian immigrant parents. She has a BA from Columbia University and an MFA from the University of Pittsburgh. Angela lives in Pittsburgh, with her piles of books, three plastic flamingos, and one wobbly disco ball. Lulu and Milagro’s Search for Clarity is her first novel.

Georgiana Darcy gets the Pride & Prejudice retelling she deserves in Amanda Quain's Accomplished, a sparkling contemporary YA featuring a healthy dose of marching band romance, endless banter, and Charles Bingley as a ripped frat boy.

Booksmart meets Never Have I Ever in this Latinx road trip adventure—a big-hearted, voice-driven YA about two sisters who couldn’t be more different, but become begrudging partners on their school’s cross-country college trip—from debut author Angela Velez. Perfect for fans of Lilliam Rivera, Jenny Han, and Sandhya Menon.