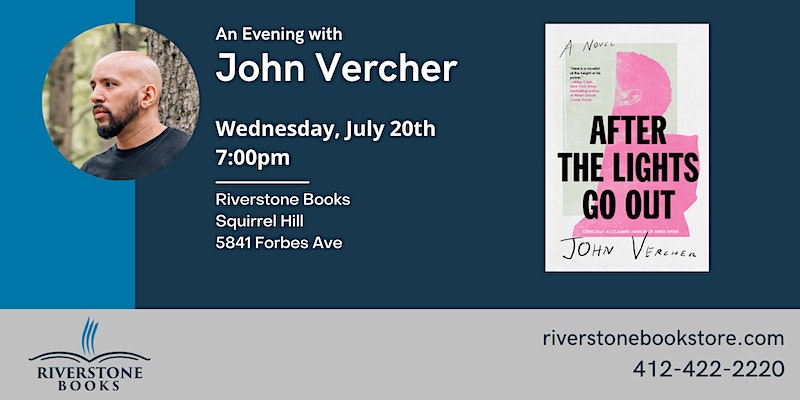 Riverstone friend John Vercher returns with AFTER THE LIGHTS GO OUT, the follow-up to his critically-lauded debut novel, THREE-FIFTHS

Riverstone Books is thrilled to be hosting Pennsylvania native and University of Pittsburgh alum John Vercher to celebrate his new novel, After the Lights Go Out. His debut novel, Three-Fifths, set in Pittsburgh, was on a multitude of 2019's best of lists. His vist to Riverstone for that book was an incredible evening, so make sure not to miss him this time.

A harrowing and spellbinding story about family, the complications of mixed-race relationships, misplaced loyalties, and the price athletes pay to entertain

Xavier “Scarecrow” Wallace, a mixed-race MMA fighter on the wrong side of thirty, is facing the fight of his life. Xavier can no longer deny he is losing his battle with chronic traumatic encephalopathy (CTE), or pugilistic dementia. Through the fog of memory loss, migraines, and paranoia, Xavier does his best to stay in shape by training at the Philadelphia gym owned by his cousin-cum-manager, Shot, a retired champion boxer to whom Xavier owes an unpayable debt.

Then Xavier is offered a chance at redemption: a last-minute high-profile comeback fight. If he can get himself back in the game, he’ll be able to clear his name and begin to pay off Shot. With his memory in shreds and his life crumbling around him, can Xavier hold on to the focus he needs to survive? John Vercher, author of the Edgar and Anthony Award–nominated Three-Fifths, offers a gripping, psychologically astute, and explosive tour de force about race, entertainment, and healthcare in America, and about one man’s battle against himself.

John Vercher lives in the Philadelphia area with his wife and two sons. He has a Bachelor’s in English from the University of Pittsburgh and an MFA in Creative Writing from the Mountainview Master of Fine Arts program. He is a contributing writer for WBUR Boston’s Cognoscenti, and NPR features his essays on race, identity, and parenting. His debut novel, Three-Fifths, was named one of the best books of the year by the Chicago Tribune, CrimeReads, and Booklist. It was nominated for the Edgar, Anthony, and Strand Magazine Critics’ Awards for Best First Novel.

After the Lights Go Out (Hardcover)

A harrowing and spellbinding story about family, the complications of mixed-race relationships, misplaced loyalties, and the price athletes pay to entertain—from the critically acclaimed author of Three-Fifths

A compelling and timely debut novel from an assured new voice: Three-Fifths is about a biracial black man, passing for white, who is forced to confront the lies of his past while facing the truth of his present when his best friend, just released from prison, involves him in a hate crime. Pittsburgh, 1995.