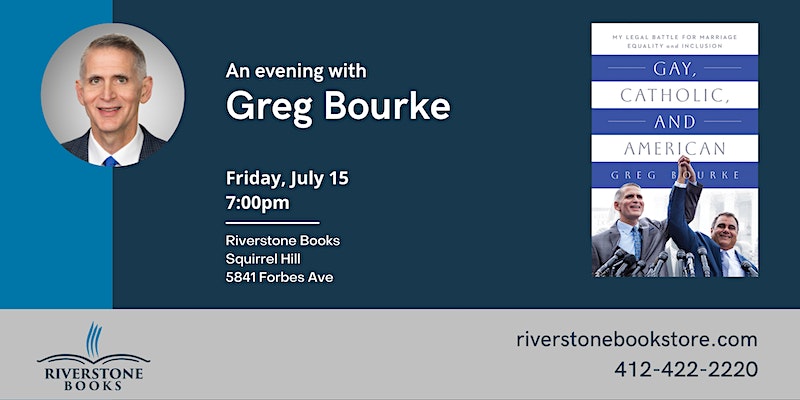 Join Greg Bourke and his husband Michael DeLeon, key plaintiffs in the US Supreme Court case that led to Marriage Equality

Catholic Greg Bourke's profoundly moving memoir about growing up gay and overcoming discrimination in the battle for same-sex marriage in the US. Gay, Catholic, and American is an illuminating account that anyone, no matter their ideological orientation, can read for insight. It will appeal to those interested in civil rights, Catholic social justice, and LGBTQ inclusion.

In this compelling and deeply affecting memoir, Greg Bourke recounts growing up in Louisville, Kentucky, and living as a gay Catholic. The book describes Bourke’s early struggles for acceptance as an out gay man living in the South during the 1980s and ’90s, his unplanned transformation into an outspoken gay rights activist after being dismissed as a troop leader from the Boy Scouts of America in 2012, and his historic role as one of the named plaintiffs in the landmark United States Supreme Court decision Obergefell vs. Hodges, which legalized same-sex marriage nationwide in 2015. After being ousted by the Boy Scouts of America (BSA), former Scoutmaster Bourke became a leader in the movement to amend antigay BSA membership policies. Over many years and challenges, this couple has managed to navigate the choppy waters of being openly gay while integrating into the fabric of their parish life community. Bourke is unapologetically Catholic, and his faith provides the framework for this inspiring story of how the Bourke De Leon family struggled to overcome antigay discrimination by both the BSA and the Catholic Church and fought to legalize same-sex marriage across the country.

Greg Bourke and his husband, Michael DeLeon, have been partnered 40 years, and were legally married in 2004 in Ontario Canada. They have been openly gay and active member of Our Lady of Lourdes Catholic Church in Louisville, Kentucky for 34 years. Greg and Michael were the named plaintiffs in the Kentucky Marriage Equality lawsuit (Bourke vs. Beshear) that was merged with Obergefell vs. Hodges at the US Supreme Court and resulted in nationwide Marriage Equality in June 2015. Greg is author of the Gay, Catholic, and American. My Legal Battle for Marriage Equality and Inclusion that was published September 2021 by the University of Notre Dame Press.

Gay, Catholic, and American: My Legal Battle for Marriage Equality and Inclusion (Paperback)

Catholic Greg Bourke's profoundly moving memoir about growing up gay and overcoming discrimination in the battle for same-sex marriage in the US.