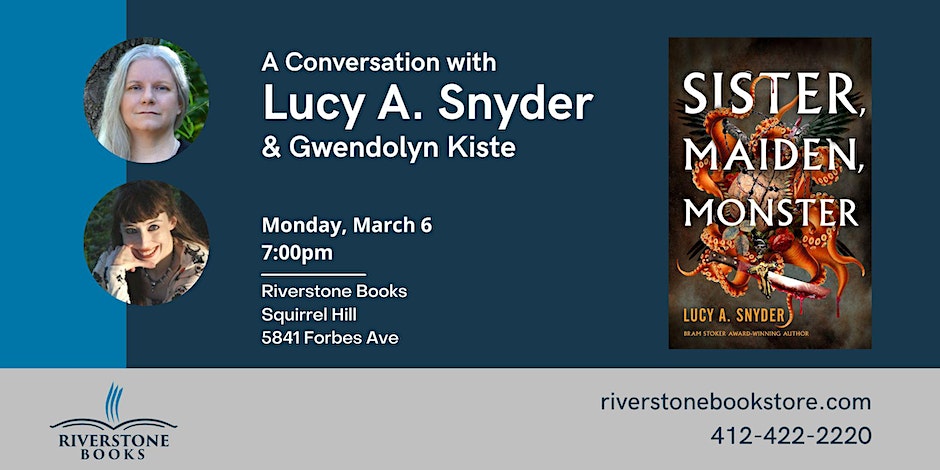 Sister, Maiden, Monster is a visceral story set in the aftermath of our planet’s disastrous transformation and told through the eyes of three women trying to survive the nightmare, from Bram Stoker Award-winning author Lucy A. Snyder.

To survive they must evolve.

A virus tears across the globe, transforming its victims in nightmarish ways. As the world collapses, dark forces pull a small group of women together.

Erin, once quiet and closeted, acquires an appetite for a woman and her brain. Why does forbidden fruit taste so good?

Mareva, plagued with chronic tumors, is too horrified to acknowledge her divine role in the coming apocalypse, and as her growths multiply, so too does her desperation.

Inspired by her Bram Stoker Award-winning story “Magdala Amygdala,” Lucy A. Snyder delivers a cosmic tale about the planet’s disastrous transformation ... and what we become after.

LUCY A. SNYDER is the five-time Bram Stoker Award-winning and Shirley Jackson Award-nominated author of 15 books and over 100 published short stories. Her most recent titles are the collections Halloween Season and Exposed Nerves. She lives near Columbus, Ohio with a jungle of plants and an assortment of pet cats, crustaceans, fish, and turtles. You can learn more about her at lucysnyder.com and you can follow her on Twitter at @LucyASnyder.

GWENDOLYN KISTE is the Bram Stoker Award­–winning author of The Rust Maidens, Boneset & Feathers, and Reluctant Immortals. Her short fiction and nonfiction have appeared in Nightmare Magazine, Tor’s Nightfire, Daily Science Fiction, and LampLight, as well as Flame Tree Publishing’s Gothic Fantasy series, among others. Originally from Ohio, she now resides on an abandoned horse farm outside of Pittsburgh with her husband, two cats, and not nearly enough ghosts.

This months Riverstone Book Club selection The House Across the Lake: A Novel (Hardcover). END_OF_DOCUMENT_TOKEN_TO_BE_REPLACED