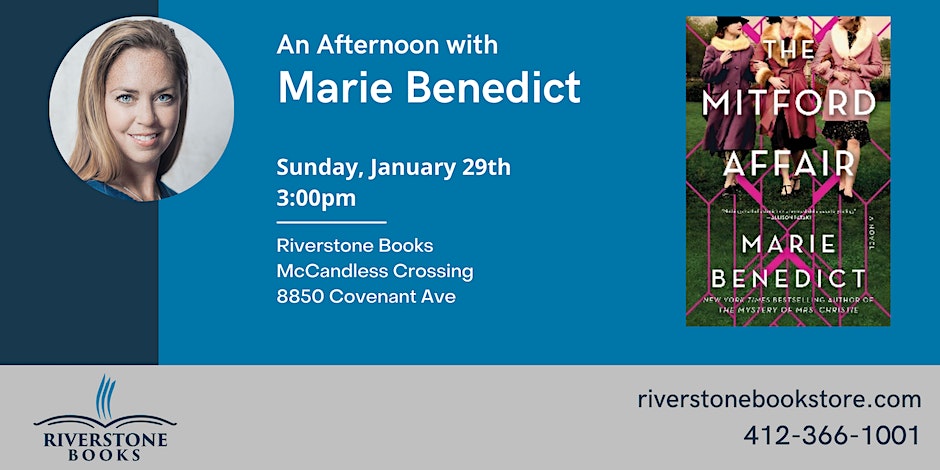 Riverstone Books is absolutely delighted to be hosting Marie Benedict once again. Every one of her visits to Riverstone has made for a fabulous event, so don't miss out on this celebration of her newest take on the important and over-looked women of history.

From New York Times bestselling author Marie Benedict—an explosive novel of history's most notorious sisters, one of whom will have to choose: her country or her sisters?

Between the World Wars, the six Mitford sisters—each more beautiful, brilliant, and eccentric than the next—dominate the English scenes. Though they've weathered scandals before, the family falls into disarray when Diana divorces her wealthy husband to marry a fascist leader and Unity follows her sister's lead all the way to Munich, inciting rumors that she's become Hitler's mistress.

As the Nazis rise in power, novelist Nancy Mitford grows suspicious of her sisters' constant visits to Germany and the high-ranking fascist company they keep. When she overhears alarming conversations and uncovers disquieting documents, Nancy must make excruciating choices as Great Britain goes to war with Germany.

Probing the torrid political climate in the lead-up to WWII and the ways that seemingly sensible people can be sucked into radical action, The Mitford Affair follows Nancy's valiant efforts to stop the Nazis from taking over Great Britain, choosing between loyalty to her country and allegiance to her family, and forcing her to learn exactly how personal is the political.

MARIE BENEDICT is the New York Times and USA Today bestselling author of Her Hidden Genius, The Mystery of Mrs. Christie, The Only Woman in the Room, Lady Clementine, Carnegie's Maid, and The Other Einstein. All have been translated into multiple languages. She lives in Pittsburgh with her family

The Mitford Affair: A Novel (Hardcover)

"Plunges readers into a world of glamorous, charismatic young British debutantes and then turns that shiny world on its head...the most delicious storytelling." —Allison Pataki, New York Times bestselling author of The Magnificent Lives of Marjorie Post

Her Hidden Genius: A Novel (Paperback)

"Brings to life Franklin's grit and spirit...an important contribution to the historical record." —The Washington Post

The new novel from the New York Times bestselling author of The Mystery of Mrs. Christie!

She changed the world with her discovery. Three men took the credit.

Her Hidden Genius: A Novel (Hardcover)

"Brings to life Franklin's grit and spirit...an important contribution to the historical record." —The Washington Post

The new novel from the New York Times bestselling author of The Mystery of Mrs. Christie!

She changed the world with her discovery. Three men took the credit.

“Historical fiction at its best!”*

The Mystery of Mrs. Christie: A Novel (Paperback)

"A stunning story... The ending is ingenious, and it's possible that Benedict has brought to life the most plausible explanation for why Christie disappeared for 11 days in 1926."—The Washington Post

From Marie Benedict, the New York Times bestselling author of The Only Woman in the Room! An incredible novel that focuses on one of the people who had the most influence during World War I and World War II: Clementine Churchill.

The Only Woman in the Room: A Novel (Paperback)

Bestselling author Marie Benedict reveals the story of a brilliant woman scientist only remembered for her beauty.

From the bestselling author of The Only Woman in the Room comes a mesmerizing tale of historical fiction that asks what kind of woman could have inspired an American dynasty.

The Other Einstein: A Novel (Paperback)

From beloved New York Times and USA Today bestselling author Marie Benedict comes the story of a not-so-famous scientist who not only loved Albert Einstein, but also shaped the theories that brought him lasting renown.

This months Riverstone Book Club selection The House Across the Lake: A Novel (Hardcover). END_OF_DOCUMENT_TOKEN_TO_BE_REPLACED