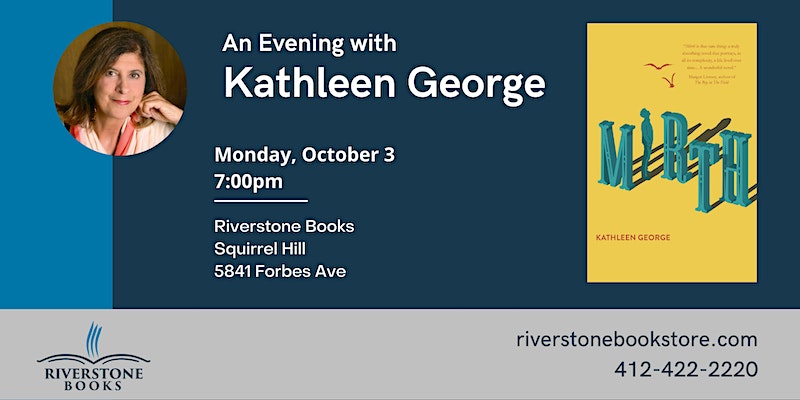 Mirth chronicles the struggles of a writer, Harrison Mirth, a romantic man who writes about love and tries to find it through three marriages, in three cities, and always with renewable hope.

Kathleen George was born in Johnstown Pennsylvania. As a child, she wanted to be a writer. She wrote stories and plays in high school and in her undergraduate years as a creative writing major at the University of Pittsburgh. She went on to earn a Ph.D. in Theatre (also at Pitt). By then she had made her home in Pittsburgh. For eight years she taught theatre at Carlow College, where she directed many plays. Then she accepted a teaching position at Pitt where she continued to direct and teach dramatic literature and playwriting; in the early 80s, she began to add fiction writing back into the mix. In 1988, she earned an M.F.A. degree in Creative Writing (also at Pitt!) on the side. She is a Professor in the Theatre Arts Department. She is the author of acclaimed novels including The Odds (nominated for an Edgar® award for best novel by the Mystery Writers of America), The Johnstown Girls (about the Johnstown Flood), and The Blues Walked In, a novel about Lena Horne and jazz.

“…a dazzling portrait of a man who lives up to his name, and of those who love him. A wonderful novel.” —Margot Livesey, author of The Boy in The Field

Mirth chronicles the struggles of a writer, Harrison Mirth, a romantic man who writes about love and tries to find it through three marriages, in three cities, and always with renewable hope.

The Blues Walked In (Paperback)

In 1936, life on the road means sleeping on the bus or in hotels for blacks only. After finishing her tour with Nobel Sissel’s orchestra, nineteen-year-old Lena Horne is walking the last few blocks to her father’s hotel in Pittsburgh’s Hill District. She stops at a lemonade stand and meets a Lebanese American girl, Marie David.

Ellen Emerson may be the last living survivor of the Johnstown flood. She was only four years old on May 31, 1889, when twenty million tons of water decimated her hometown of Johnstown, Pennsylvania. Thousands perished in what was the worst natural disaster in U.S. history at the time.

The child was taken in broad daylight, on a warm June morning, in a crowded shopping area in downtown Pittsburgh.

The Homicide Department is upside down—Richard Christie is in the hospital, Artie Dolan is headed away on vacation, John Potocki's life is falling apart, and Colleen Greer is so worried about her boss's health, she can hardly think. A young boy in Pittsburgh's North Side neighborhood dies of a suspicious overdose.

A killer puts a child in danger and sends a police detective on a hunt for justice in a novel that will "appeal to fans of Mary Higgins Clark" (Booklist).