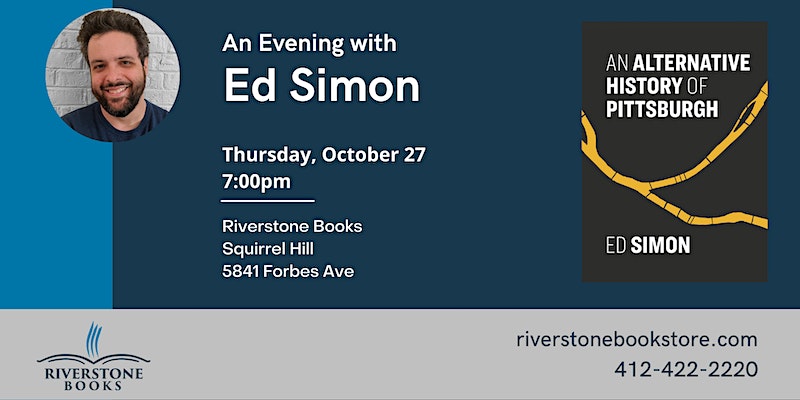 The land surrounding the confluence of the Allegheny, Monongahela, and Ohio rivers has supported communities of humans for millennia. Over the past four centuries, however, it has been transformed countless times by the many people who call it home. This brief, lyrical, and idiosyncratic collection follows the story of America’s furnace through a series of interconnected segments, covering all manner of Pittsburgh-beloved people, places, and things, including:

Accessible and funny, An Alternative History of Pittsburgh is a must-read for anyone curious about this storied city, and for Pittsburghers who think they know it all too well already.

Ed Simon is the incoming Executive Director of Belt Media Collaborative and the Editor-in-Chief for Belt Magazine, a contributing editor for the History News Network, and a staff writer at The Millions, which the New York Times has called the “indispensable literary site.” He is the author of several books, including An Alternative History of Pittsburgh and most recently Pandemonium: A Visual History of Demonology. His essays have appeared in The Atlantic, The Paris Review Daily, The Washington Post, Newsweek, Poetry, McSweeney’s, and The New York Times among dozens of others. Originally a native of Pittsburgh, he has lived in New York City, Boston, Washington DC, and now his hometown again.

An Alternative History of Pittsburgh (Paperback)

Ed Simon tells the story of Pittsburgh through this exploration of its hidden histories--the LA Review of Books calls it an "epic, atomic history of the Steel City."

Binding the Ghost: Theology, Mystery, and the Transcendence of Literature (Hardcover)

Binding the Ghost is both manifesto and example of a new variety of reading that centers a theological perspective in considering what literature actually does.

A compendium celebrating the art of hell and its minions

Pandemonium: The Illustrated History of Demonology presents—for the first time—Satan’s family tree, providing a history and analysis of his fellow fallen angels from Asmodeus to Ziminiar.

The God Beat: What Journalism Says about Faith and Why It Matters (Hardcover)

In the wake of the horrific 9/11 terrorist attacks we, as an increasingly secular nation, were reminded that religion is, for good and bad, still significant in the modern world.

The Anthology of Babel (Paperback)

Why should there only be literary scholarship about authors who actually lived, and texts which exist? Where are the articles on Enoch Campion, Linus Withold, Redondo Panza, Darshan Singh, or Heidi B. Morton? That none of these are real authors should be no impediment to interpreting their invented writings.

Furnace of This World: Or, 36 Observations about Goodness (Paperback)

In the tradition of Roland Barthes' Mythologies and Walter Benjamin's aphoristic Theses on the Philosophy of History, Ed Simon's Furnace of this World is a fragmentary, digressive, impressionistic account of what the radical implications of goodness could possibly be in late capitalism.